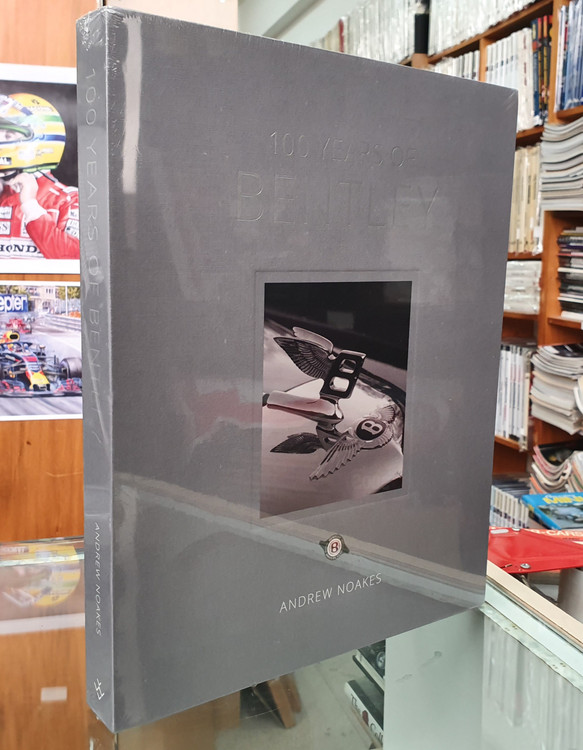 One of the most recognised and revered car brands, Bentley celebrates its centenary in 2019. In conjunction with the Bentley Drivers Club and the W.O. Bentley Memorial Foundation, 100 Years of Bentley is a lavish celebration of the company, from its earliest models right up the modern day cars.

A six-times winner in the gruelling Le Mans 24-hour race, Bentley is also the brand behind iconic cars such as the 41/2-Litre ‘Blower’, the R-type Continental, and modern classics such as the Continental GT and Mulsanne. Featuring more than 200 pictures, many from the club’s archives and some never seen in print before, this beautiful book details the whole history of Bentley. From W.O. Bentley’s early days as a railway engineer along with his first attempts at modifying French DFP cars, to the company’s early racing exploits, including its victories in the early Le Mans races. Covering the Bentley brand’s revival in the 1980s and renewed impetus when it was acquired by the Volkswagen group, the story is brought up to date with the awesome new Bentleys built for the 21st century and the new era of electrification just around the corner.

The author
Andrew Noakes is an award-winning motoring writer and automotive journalism lecturer. Andrew trained as an automotive engineer but decided to move into motoring journalism and has been writing about cars for over 20 years. He is the Chairman of the Guild of Motoring Writers and is the author of more than 20 books on cars and motorsport, including Aston Martin DB – 70 Years (Aurum Press, 2017).

MSRP:
Now: $299.95
Was:
By: Martin Bennett . The names Rolls-Royce and Bentley have long been synonymous with engineering excellence, longevity, luxury and beauty of line. All these attributes were developed to a very high...

MSRP:
Now: $59.95
Was:
Just as the Rebel Alliance used various starfighters in its battle against the expansion of Imperial control across the galaxy, the subsequent Resistance used even more technologically advanced ships...

MSRP:
Now: $59.95
Was:
Imperial and First Order Models Just as the Galactic Empire used great fleets of starships to expand Imperial control across the galaxy, the subsequent authoritarian government, the First Order, used...

MSRP:
Now: $19.95
Was:
paperback, 31 pages,  International Harvester (IH) was created in a 1902 merger between the McCormick Harvesting Machine Co and the Deering Harvester Co,production concentrating on tractors and...

MSRP:
Now: $79.95
Was:
Widely regarded as the pinnacle of motorsport in Australia, the Bathurst 1000 has been a staple on the V8 Supercars racing calendar since its inception in 1997. With this limited edition collector...

MSRP:
Now: $99.00
Was:
Published in 2020, hardcover, 112 pages The wartime Jeep continues to fascinate enthusiasts around the world, nearly eight decades after the first prototypes were built. Yet while it is true that...