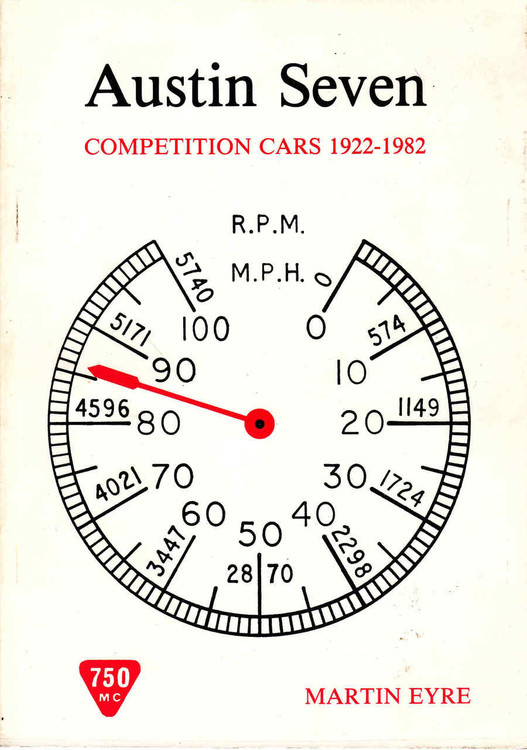 Sixty years have passed since that day in 1922 when Sir Herbert Austin, bowler hatted as befitting the boss of the period, rushed down the drive to his home, Lickey Grange in the first Seven. So impatient was he that he took off with the little car bonnetless, shedding spanners and other loose bits as he went, returning triumphantly in due course.

Sir Herbert was a worried man. The Company, like so many others, had fallen into recession, only his closest confidants would have known that he had been forced to seek temporary wage bill cover from an outside source. This small car was a make or break project and an enormous gamble in those days. After a quiet start it became an outstanding success and by 1925 it had ousted its major competitor, the motor cycle combination, providing motoring never before within reach of working class families.

Sir Herbert's son-in-law Arthur Waite recognised the competition potential of the Seven and by 1923 he had a team of rather frail looking two seaters competing succestsfully at home and abroad. Later, other people produced Austin Seven competition cars including Gordon England with his Brooklands model. Looking at it as a schoolboy in 1925 fired my imagination. I saw it as the perfect racer!

My father bought his first of many Sevens in that year. I taught myself to drive and in no time I was faster than my parent. Waiting to start my apprenticeship at I.ongbridge in 1927 I familiarised myself with the Seven's technical mysteries. Simplicity was the keynote, a fact which has helped both private motorists and competition entrants even to this day.

I was promoted to the Racing Dept. at 20yrs and in answer to questions by Sir Herbert on my ambitions I said quite simply that I was sure I had the ability for race driving and I would strive to that end. I expect he thought I was mad. However when I did race successfully he always sent for me and said "thank you for doing so much for the Company" and so on. There was a good spirit at Longbridge then. People believed in the Austin and were proud to work there. How different it seems to be today.

I visit Redual infrequently but when I do I usually visit the grave of Lord and Lady Austin in the little churchyard on Rose Hill. There is atmosphere there. I fancy I can hear the Grasshoppers screaming up the hill on test and I have recalled the day when I shot past the Old Man's gateway at 85 m.p.h. just as he appeared in his Clifton 12 h.p. tourer. The rollicking 1 sustained when he found me is still fresh in my mind. If one did not argue he soon got over it. He was a hard man but behind it all there were the normal human frailties and I liked him.

I drove all the competition cars culminating in the Jamieson twin cam which was a wonderful car. One felt part of it which is the ultimate in race driving.

The idea of setting up a 750 Club did not occur to us at Longbridge. It is therefore fortunate that we had people like Bill Boddy around with vision to get things moving. He continues to do a good job in Motor Sport and he is obviously a leading authority on the history of the motor car.

New names appeared after the war bitten by the motor racing bug and, with enforced low cost in mind, 750 Club events were the answer. This condition produced Colin Chapman. The early Marks of his famous Lotus were modified Austin 7's to which Colin applied his considerable technical flair in terms of better handling and increased power. Colin Chapman has achieved more for British motor racing than any of his contemporaries in the post war period.

Vintage events have kept the Ulsters alive, and development continues to this day. During 1981 we witnessed the "invasion" from Australia of five young men with single seaters beautifully prepared. All who saw them were impressed by the technical excellence and back up equipment. They were out to show the Poms a thing or two and they did so. I am sure the example will result in similar developments over here in 1982.

This little book will help to keep the name Austin to the forefront. It is good to know the old name will continue to be heard for many years to come in the haunts where "750" men tend to congregate.

The Austin Seven - The Motor For The Million

MSRP:
Now: $195.00
Was:
By: Rinsey Mills .**VERY RARE FIRST EDITION PERSONALLY SIGNED BY AUTHOR*** Restorer's Guide Introduction The Austin Seven, one of the most endearing cars of all time, has such a strong following...

MSRP:
Now: $29.95
Was:
Having this book in your pocket is just like having a real marque expert by your side. Benefit from the author’s years of Austin Seven ownership, learn how to spot a bad car quickly and how to...

MSRP:
Now: $99.95
Was:
By: Brooklands Books . The first Sprites were designed as affordable sports cars. They were simple and basic with a tuned Austin A35 engine. The 1961 restyle gave the Sprite a more conventional...