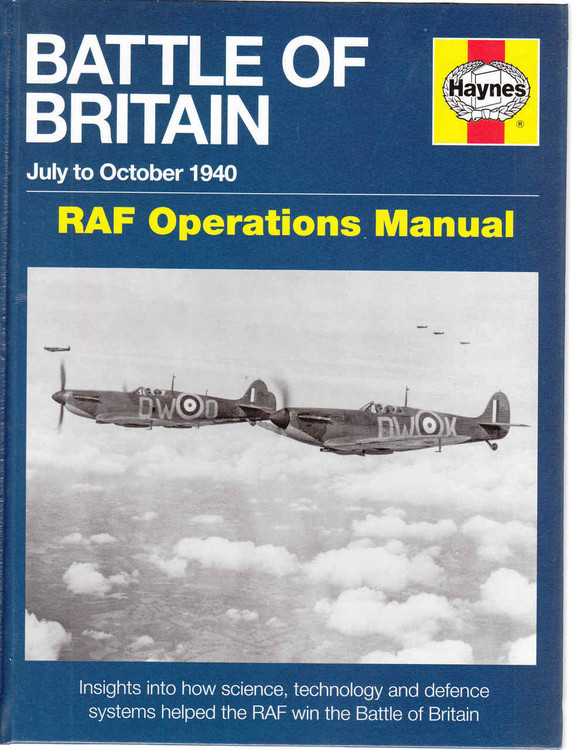 When the Royal Air Force was called upon to defend Britain from invasion in 1940, RAF Fighter Command was already operating within a fully integrated air defence system that had been set up before the war. This comprehensive command and control system comprised not only the fighter squadrons themselves but also radar, the Observer Corps, Balloon Command and Anti-Aircraft Command. To a certain extent, the fall of France in June 1940 had been brought about through the lack of any centralised and coordinated command and control structure, but it was to be a very different story for the defence of the British Isles during the Battle of Britain that followed.

The Haynes Battle of Britain RAF Operations Manual sets out the planning, organisational and operational details of how the RAF, and specifically Fighter Command, fought that battle. It describes how the system worked and how its constituent parts all meshed together to allow Fighter Command, hard-pressed and outnumbered, to fight the Luftwaffe in an organised and effective fashion. Also examined are the weapons, tactics, operational procedures, equipment, terminology, individual units and organisations, and the inevitable casualties.
The 'Dowding System', as it was known, may not always have worked exactly as planned, but without it the air defence of Great Britain in 1940 could not have had a successful outcome.

Author Andy Saunders is a published author and researcher specialising in military aviation history and in particular the Battle of Britain. He is the editor of Britain at War magazine and a regular contributor to the aviation press world-wide. His books include Finding The Few Finding The Foe, Bader's Last Fight and Convoy Peewit. He lives in Sussex.

MSRP:
Now: CAD51.72
Was:
Insights into the organisation, equipment, men, machines, technology and tactics of the RAF's bomber offensive 1939 - 1945 Night and day in the Second World War RAF Bomber Command pounded away at...

MSRP:
Now: CAD103.53
Was:
Author, Philip Vorwald in this brilliant Through The Lens title, goes behind the scenes of the famous Battle Of the Bulge's various battlefields spresd around Belgium, Luxembourgh and Germany. With...

MSRP:
Now: CAD51.77
Was:
By: Stephen Stathis . This Hardback Edition Is Limited To 600 copies This unique 176 page book, with a foreword by Colin Bond, features many colour and black and white images (44 pages of colour...

MSRP:
Now: CAD23.48
Was:
The lesser known naval exploits of the Australian submarine HMAS AE2 supporting the ANZAC Gallipoli campaign are brought to light in this exciting book. Authors, Vecihi and Hatice Basarin tell the...

MSRP:
Now: CAD28.19
Was:
This wartime story of a young Australian RAAF bomber pilot is told with such artistic flair, that it takes the reader back to those days in the 40s when the young man did all his flying over enemy...