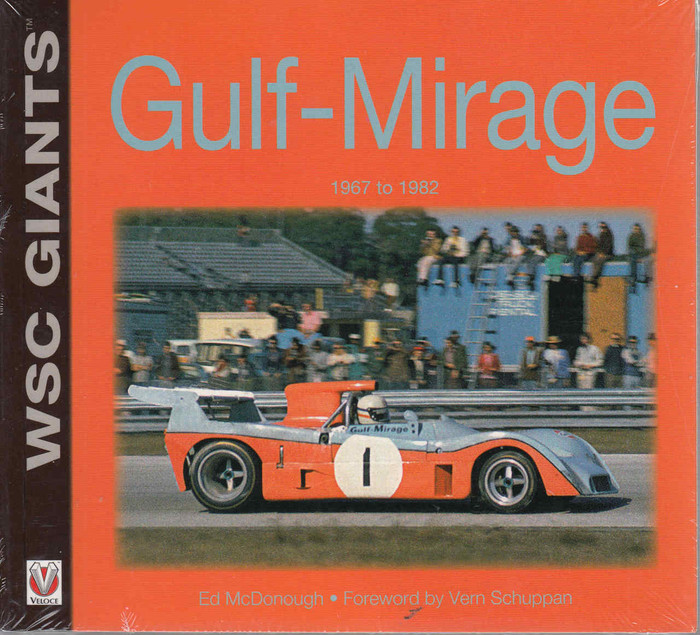 Exploring the origin and history of Mirage sports cars designed by the British-based John Wyer Automotive firm to contest the World Sports Car Championship, against giants like Porsche, Ferrari and Alfa Romeo.

A true David versus Goliath story, this is a fascinating look at one the great eras of motorsport.

Detailing the origin and history of the Mirage sports cars designed by the British-based John Wyer Automotive firm to contest the various versions of the World Sports Car Championship between 1967- and 1975.Funded by the Gulf Oil Corporation, the cars began as developments of the Ford GT40,but soon assumed their own distinctive identity.

After 1975, the Mirage was no longer in John Wyer's hands, but the name lived on, and the marque remained a significant player in the World Championship -
for some years.

This book includes the developmental and race history, with a full list of all events and individual chassis numbers.

MSRP:
Now: $39.95
Was:
By: Ian Wagstaff . Description The history of the world's most successful endurance racing car: the Audi R8, featuring reports of all of its 80 races, plus profiles of the 35 drivers who raced the...

MSRP:
Now: $49.99
Was:
By: Ed McDonough . Book Description The late 1960s and early 1970s were a significant era in the world of international sports car racing. As the motor racing rule-making body moved back and forth...

MSRP:
Now: $59.99
Was:
By: Ed McDonough, Peter Collins . The late 1960s and early 1970s formed a significant epoch in the world of international sports car racing. As the motor racing rule-making body moved back and forth...

MSRP:
Now: $249.99
Was:
By: Darwin Holmstrom . In 1963 Pontiac's Chief Engineer John DeLorean and his two favorite staff engineers, Bill Collins and Russ Gee, came up with an inspired way to keep Pontiac cars in the...

Guide To Racing Cars - From Grand Prix Racing to Karting

MSRP:
Now: $99.99
Was:
By: Darwin Holmstrom . Description The birth of the muscle car revolution can be summed up in three simple letters: G-T-0. The release of Pontiac's GTO rocked the performance car world in 1964...

MSRP:
Now: $195.00
Was:
By: Doug Boyce . Book Description The growth of drag racing from the late 1950s through the 1980s was nothing short of spectacular, and Bill "Grumpy" Jenkins was there through all of it...