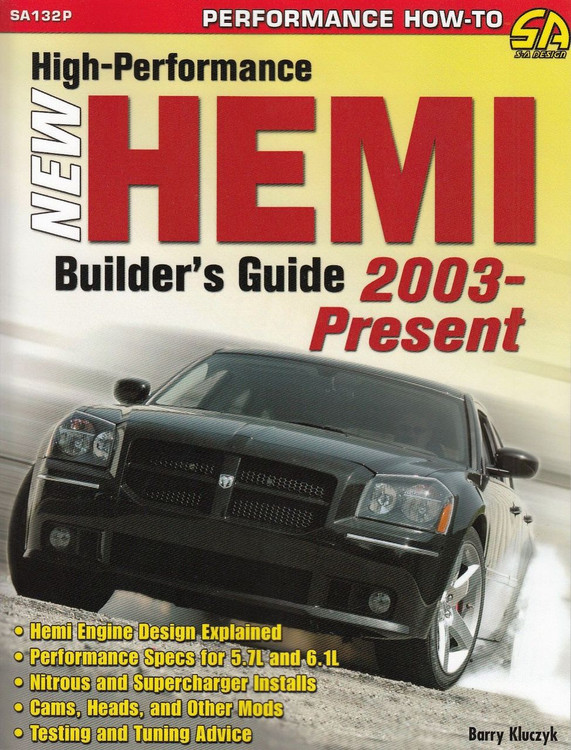 Introduced in 2003, the new, high-tech Hemi has taken the fight to Ford and Chevy, sparking a new era of high-stakes competition among domestic V-8, rear-drive cars and trucks. Chrysler's hot-selling Hemi-powered vehicles include the 300C, Charger, Magnum, and Ram trucks, as well as the Durango, Grand Cherokee, and other SUVs. Special high-performance SRT models have added another level of performance to Chrysler's Hemi lineup. And the Hemi is only going to get hotter with the highly anticipated 2008 introduction of the Dodge Challenger.

High-Performance New Hemi Builder's Guide is the first book to address the new Hemi and will show you how to get the most out of your Hemi-powered ride. Author Barry Kluczyk explores the design of the new Hemi engine and explains how it can be modified and tuned. The book includes detailed, step-by-step nitrous and supercharger installs, tuning and electronic engine management issues, various camshaft and head options and modifications, and even discusses other bolt-on performance and appearance upgrades that will help you make your Hemi just the way you want it. The photos in this edition are black and white.

Barry Kluczyk graduated from Central Michigan University with a degree in journalism, with the intent of writing about cars for a living. His first professional job was as managing editor at Musclecar Review magazine. He then moved on to McMullen-Yee Publishing (soon to be Primedia) and worked on several magazines. He moved back to Michigan in 1996 to work as a writer and editor of several auto manufacturer customer publications. He is currently employed as a new vehicle product writer at a Detroit-area public relations firm.