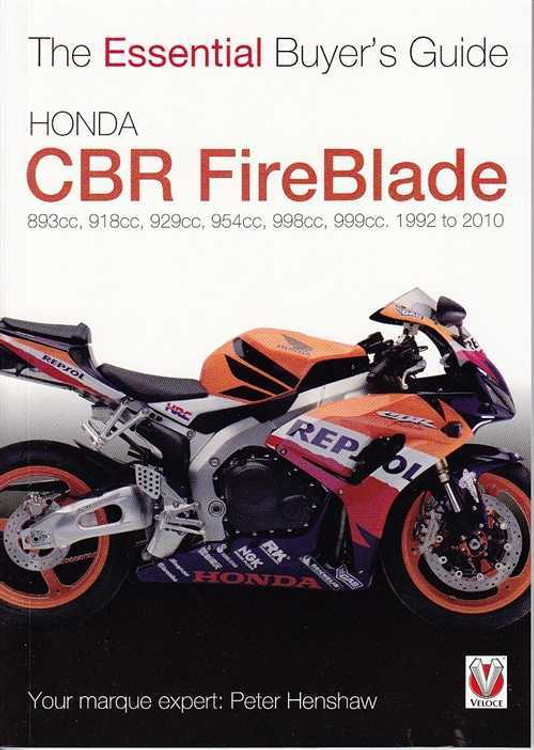 Having this book in your pocket is just like having a real marque expert by your side. Benefit from Peter Henshaw's years of Honda CBR FireBlade experience, learn how to spot a bad bike quickly, and how to assess a promising one like a professional. Get the right bike at the right price!

Packed with good advice - from running costs, through paperwork, vital statistics, valuation, and the CBR FireBlade community, to whether a CBR FireBlade will suit you and your lifestyle - this is THE COMPLETE GUIDE to choosing, assessing and buying the CBR FireBlade of your dreams.

CBR FireBlade - fewer names are more evocative in motorcycling, certainly since the 1990s. Honda's most enduring sports bike deserves every shred of that adulation, and for good reason: it offers race track performance in a road legal bike, yet it will happily potter through town, is civilised and relatively comfortable. Also, if looked after properly the 'Blade is very reliable and capable of serious mileage.

For simplicity we'll refer to the model as the Fireblade or just 'Blade from this point.

When it was launched back in 1992, the FireBlade caused a sensation. Here was a 900cc sports bike, the size and weight of a 600. Lighter than its litre-bike rivals by at least 30kg, it handled like a 600, too. It could rocket through a standing quarter-mile in 10.5 seconds (making it the fastest production bike at the time), and top 166mph. That was the 124bhp original - the latest FireBlades pack 180bhp and are no heavier.

Better still, the FireBlade has always sold in huge numbers, so if you're looking for a secondhand one, there's plenty of choice. If the bike you're looking at has unexplained crash damage, or no service history, or the documentation doesn't match up, then just walk away and find a better one. And being a Honda, this
is a quality, well engineered machine with few foibles - another reason to buy secondhand.

This book is a straightforward, practical guide to doing just that. It doesn't list all the correct colour combinations for each year, or delve into the minutae of year-by-year changes (though we have provided a brief guide) - there are books and websites that will supply all of this. Hopefully, it will help you avoid the proverbial lemon, because as with any bike, there are some of those about.

In fact, it's worth remembering that not everyone can cope with the FireBlade's manic performance. With a power-to-weight ratio not far short of a Formula 1 car, it can get the unwary into trouble very quickly So when looking at a used FireBlade, checking for crash damage has to be top of your list. You might even think twice about buying a
'Blade at all, if it's your first sports bike — a 600 won't scare you quite so easily and could make more sense.

On the other hand, if you do buy a FireBlade, you will be riding one of the milestone sports bikes — pick a decent one, treat it with respect, and you shouldn't regret it. Incidentally, North American readers may be wondering what this 'FireBlade' business is all about, as the name was never officially used in the USA. There, the bike was known by its more prosiac CBR900RR, CBR1000RR, and so on. The bikes, whether or not badged as FireBlades, are the same.

Thanks are due to Roger Maddever, proud owner of a 60,000-mile 'Blade, to Matt Saunders at V&J Honda, and Nick at V&J Suzuki. Also to Honda UK, Annice Collet at the VMCC Library, and to Louise Hillier and Gary Prisk.

MSRP:
Now: $29.95
Was:
By: Malcolm Bobbitt . Fiat’s 500 and 600 models are amongst the smallest cars in the world, yet for all their diminutive proportions they are chic, fun to drive and capable of travelling...

MSRP:
Now: $29.95
Was:
By: Roger Williams . A small investment in this book could save you a fortune ... With the aid of this book's step-by-step expert guidance, you'll discover all you need to know about the car...

MSRP:
Now: $18.50
Was:
By: Ken Cservenka, Richard Copping . With the aid of this book's step-by-step expert guidance, you'll discover all you need to know about the car you want to buy. Unique point system will help you to...

MSRP:
Now: $24.50
Was:
Having this book in your pocket is like having a real marque expert by your side. Benefit from the author’s years of real ownership experience, learn how to spot a bad car quickly, and how to...

MSRP: $29.95
Now: $18.50
Was:
By: Peter Henshaw . Description STOP! Don't buy a Honda CBR600/Hurricane without buying this book FIRST! Having this book in your pocket is just like having a real marque expert by your side. Benefit...

MSRP:
Now: $250.00
Was:
By: Mick Duckworth .**VERY RARE BOOK IN EXCELLENT UNREAD CONDITION** When it was unveiled in 1968, Honda's CB750 Dream Four sent shock waves through the world of motorcycling. With an imposing...

MSRP:
Now: $49.95
Was:
By: Brooklands Books . This is a book of road track and comparison tests, new model introductions, performance and technical data, specifications, engine strip and servicing on Honda's 'groovy'...

MSRP:
Now: $69.95
Was:
With a Haynes Manual, you can do it yourself, from simple maintenance to full repairs. Every Manual is based on a complete stripdown of the bike. Our authors and technicians work out the best methods...

MSRP:
Now: $99.95
Was:
By: Rob Simmonds . Tadao Baba of Honda research and development, had a dream. It was to build a superbike for the masses that truly deserved the title of 'sportsbike'. Ignoring the marketing...

MSRP:
Now: $49.95
Was:
By: Brooklands Books . The Honda FireBlade set a new benchmark for super sports bikes by dramatically improving the power-to-weight ratio over its competitors. The CBR900RR story is told through 28...