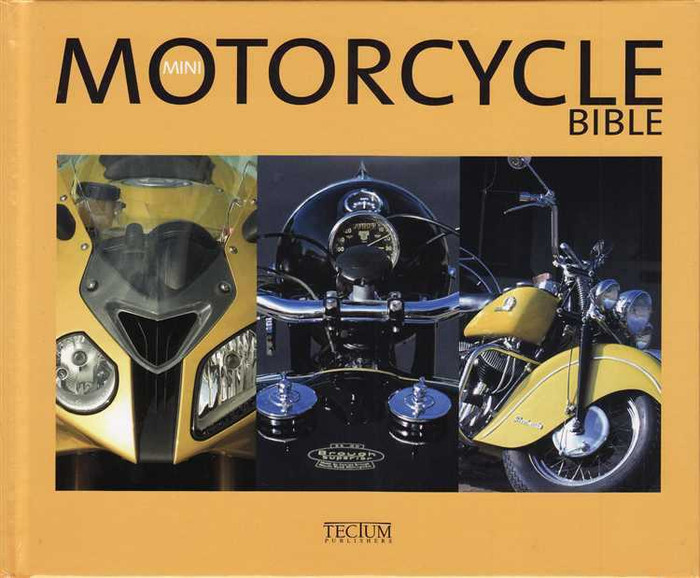 This luxurious photographic history of the motorcycle takes the aficionado on a breathtaking ride from the 1920s to the present day. Detailed images depict brands from Japan, Italy, Germany, the USA and the UH, showing off their aesthetic form and inspired technology up close, while general pictures portray an evolutionary journey of experimental designs, classic models and familiar, modern shapes.

The mini Motorcycle Bible boasts over 350 colour and black & white photographs, displaying the sleek speed of models like the Yamaha RD 500 and the Ducati 996 SPS, the practical simplicity of early models like the Black Hawk, the quintessential elegance of the Maserati 160 Sport, the Morton and the Cleveland, and the virile splendour of the Harley Davidson. Oozing richness, these photos give a true sense of the allure that only motorcycles can create.

One of the most remarkable things about the development of the motorcycle over more than a century is how little the experience of riding a bike has changed in that time. Of course there are huge differences between today's sophisticated superbikes and the earliest models, let alone the wooden-framed Einspur, or One-track, with which German engineer Gottlieb Daimler began motorcycling's story in 1885. But the motorcycle's essential appeal has changed little since the basic layout of the "iron horse" - with its engine slung low between two wheels, and steering via a pair of handlebars linked to the front wheel - was established early in the last century.
If the experience of leaning into a turn with the wind tugging at your neck remains little changed, the machines themselves and the way they are used have been transformed. During the first half of the last century, most motorbikes were used purely for transport, although there were always enthusiasts who appreciated the style and performance of machines as varied as Brough's Superior and Indian's Chief. Increasingly, though, bikes were seen as a lifestyle statement and a form of entertainment. After British twins had dominated the 195os and '6os, Honda's four-cylinder CB750 arrived in 1969 to begin the superbike era of ever-increasing performance, in which many machines are used for leisure as much as for transport. Recent years have seen a continuation of this theme, plus an explosion of technology as manufacturers offer a variety of engine types, and a huge range of models from lightweight sports machines to luxury tourers. Many incorporate sophisticated electronics, such as BMW's S1000RR with its anti-lock brakes, alternative engine maps and traction control system. Meanwhile firms including Harley-Davidson have been successful with modern models that recreate the simplicity and styling cues of an earlier age. If the Mini Motorcycle Bible highlights one thing above all, it's the fascinating diversity of bikes over the years.

MSRP:
Now: $299.99
Was:
By: Joe Sackey . Named after the Spanish ranch famed for its ferocious bulls, the Lamborghini Miura’s flamboyance and engineering wowed the public when it was unveiled in the mid-sixties. Yet despite...

MSRP:
Now: $79.95
Was:
By: Fred Rau . Description Touring on a motorcycle has never been more popular than it is today, but with more and more people hitting the open road, a growing number are doing so without the proper...

MSRP:
Now: $49.95
Was:
By: Timothy Remus .  Description Airbrush Bible offers something for anyone interested in the art of airbrushing. This new book from Wolfgang Publications offers how-to sequences done with some...

MSRP:
Now: $69.99
Was:
The Chevrolet Small-Block Bible: How to Choose, Buy, and Build the Ultimate Small-Block from Generation Ito Today's LS is nothing short of the ultimate Chevrolet small-block V-8 engine resource...