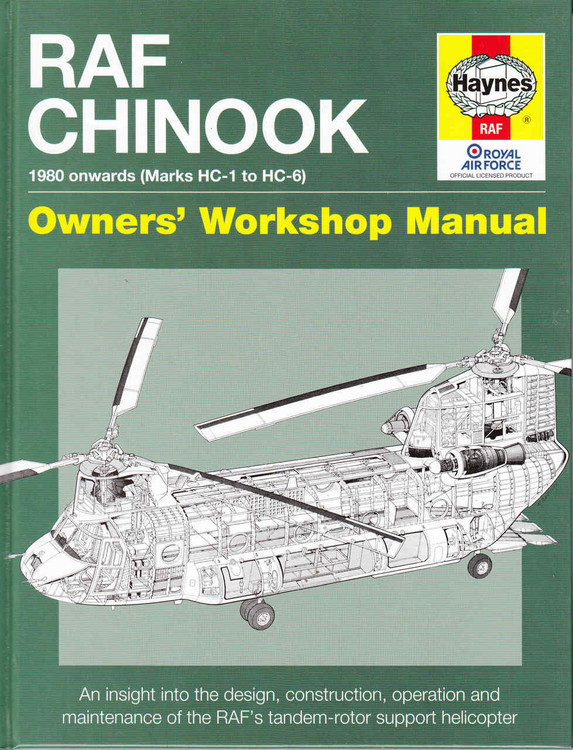 - An insight into the design, construction, operation and maintenance of the RAF's tandem-rotor support helicopter

Rugged and capable, the RAF's Boeing Chinook tandem-rotor support helicopter has been at the forefront of most UK military operations since the 1980s — from the Falklands Conflict, Northern Ireland and both Gulf Wars, to peacekeeping in Bosnia, operations in Lebanon, Kosovo and Sierra Leone, and its high profile missions with the Joint Helicopter Force in Afghanistan, providing tactical mobility for British land forces in Operation Herrick between 2002 and 2014.

The RAF operates the largest fleet of Chinook helicopters after the US Army, with three operational squadrons forming the heavy-lift element of the Joint Helicopter Command (JHC) based at RAF Odiham in Hampshire. Chinooks can operate from land or ship in diverse environments ranging from the freezing Arctic to humid jungles and the blistering heat of the desert. They are used for trooping, resupply, and battlefield Casualty Evacuation (CASEVAC), as well as for carrying internal and/or under-slung loads. Crew-served weapons can provide self-defence.

With the full cooperation of the RAF, author Chris McNab climbs the cargo ramp and enters the world of the Chinook to give readers an unprecedented insight into what makes this helicopter so successful. He meets the pilots and crewmen to discover what it's like to operate, and rolls up his sleeves with the engineers to find out what it takes to keep the Chinook flying.

Author
Chris McNab is an author and editor specialising in military history and military technology. To date he has published more than 80 books, including Riot Control Vehicles (2015), A History of the World in 100 Weapons (2011), Deadly Force (2009) and Tools of Violence (2008). He is the contributing editor of Hitler's Fortresses: German Fortifications and Defences 1939-45 (2014) and Hitler's Armies: A History
of the German War Machine 1939-45 (2011). Chris is also author of the Haynes Kabelwagen/Schwimmwagen Manual.

MSRP:
Now: $39.95
Was:
By: Alfred Price, Paul Blackah . Supermarine Spitfire Introduction The Spitfire is more than just an aeroplane. It is an icon. It is, moreover, an icon that is quintessentially, indubitably...