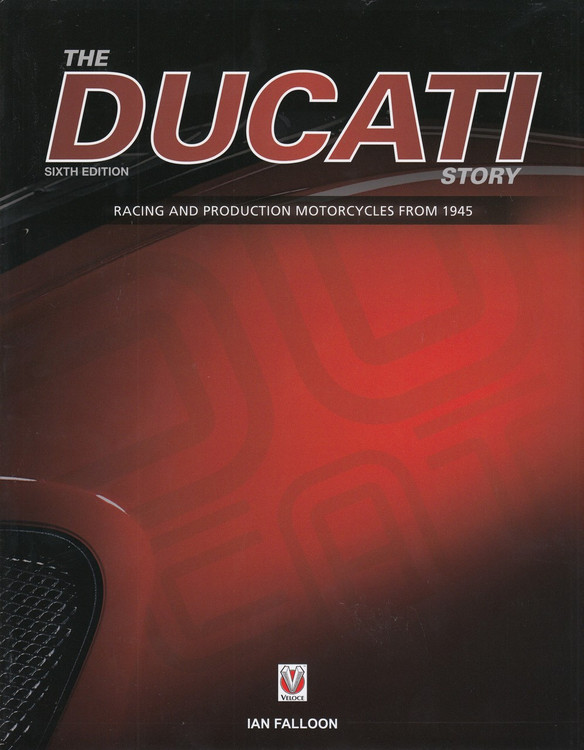 • The fascinating story of Ducati – one of the most iconic names in motorcycle history
• From bombed out ruins at the end of the Second World War Ducati has grown to be one of the world’s premier motorcycle manufacturers
• Foreword by Fabio Taglioni - engineer and creator of Ducati’s desmodromic valve system
• The unique system of positive valve actuation continues to set Ducati apart
• Features Ducati’s modern exotic Superbikes
• Detailing Ducati’s racing history, competing at the highest level of motorcycle competition
• Even the unusual models, such as two strokes, are covered here
• Ducati also competes at the highest level of motorcycle competition
• And it all began with the humble 48cc Cucciolo moped!

Ian Falloon’s authoritative history of the marque – expanded and brought up to date for this 6th edition – tells the inside story of Ducati’s chequered path to glory, and describes every model, from the original 48cc Cucciolo to today’s exotic Superbikes.

The Ducati Story is brought right up to date in this new edition of Ian Falloon’s authoritative book, covering the complete history of the marque. Initially under government control, Ducati went through several decades of ups and downs, characterised by dubious managerial decisions. Held together by the great engineer Fabio Taglioni, the father of desmodromic valve gear, Ducati produced some of the finest motorcycles of the 1950s, 1960s and 1970s: the Marianna, desmo 125 single, Mach 1, 750 and Pantah. Taglioni also instigated Ducati’s return to racing, and victory in the 1972 Imola 200 was the turning point. Mike Hailwood rode the 900 Ducati to victory in the 1978 Isle of Man Formula One race and Tony Rutter took four World TT2 Championships.
Cagiva purchased Ducati in 1985, bringing a new engineer, Massimo Bordi, and new designs – most famously the Desmoquattro. In various guises this model dominated the World Superbike Championship during the 1990s, particularly in the hands of Carl Fogarty. Landmark models included the 916 and Monster, and, with the sale of Ducati to the Texas Pacific Group in 1996, the company continued to grow. The racing programme expanded to MotoGP and new model families were introduced. With control taken by the Italian company InvestIndustrial in 2006, Ducati embarked on the next era of development, Casey Stoner winning the MotoGP World Championship in 2007. Now under the Audi umbrella Ducati continues to thrive.
This new edition includes a brand new chapter featuring all the models from 2012 up to 2018.

Models Covered:
All models of Ducati since 1946. This is an update of the Ducati Story first published in 1996 and continues from 2012 where the 5th Edition finished.

MSRP:
Now: $129.95
Was:
It's part of Italian folklore how Ducati switched from electronics to motorcycle manufacturing after their Bologna factory was bombed during the Second World War and, after inventing a clip-on engine...

Ducati Desmodue -The Complete Story From Pantah to Scrambler

MSRP:
Now: $109.95
Was:
By: Ian Falloon . Description When Ducati unleashed Galluzzi's Monster at the Cologne Show at the end of 1992, few expected it to become Ducati's most successful model. Dramatically styled,...

Motorcycle Racing with the Continental Circus 1920 to 1970 (Chris Pereira)

MSRP:
Now: $29.95
Was:
Features • A true account of the experiences of private riders who raced motorcycles on the Continent • Details of pre-war and post-war European motorcycle racing • The British and...

Setting up a Home Car Workshop (By Julian Edgar)

MSRP:
Now: $37.00
Was:
Features • Step-by-step – how to set up a home car workshop • The best hand and power tools for working on your car • Welding equipment for car fabrication and repair • Home...

MSRP:
Now: $129.95
Was:
hardcover book, published in 1992 The complete guide to techniques and tools for vehicle restoration and repair.

Intermeccanica - The Story of the Prancing Bull (Updated Edition)

MSRP:
Now: $83.50
Was:
• The history of sports car maker Intermeccanica published for the first time• Intermeccanica cars are highly collectible and are still made today• A David vs. Goliath story which...