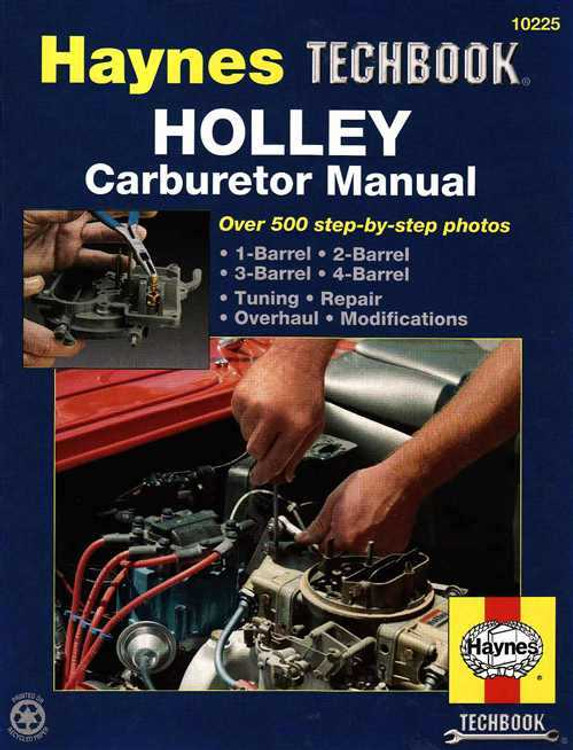 Over 500 step-by-step photos take the mystery out of carburetors - the perfect tool for the home mechanic!

About this manual:
The goal of this manual is to help you obtain the very best your Holley carburetor has to offer, whether it be performance or economy. Since these carburetors are fine precision instruments, the manual assumes that you already have a basic understanding of how an engine works and are fairly competent with the use of tools and safe working procedures.
For many, the carburetor represents a portion of a vehicle that just shouldn't be tampered with, and because of this re-pairs or modifications to the carburetor are usually left to someone else. A considerable amount of money can be saved and much knowledge can be gained by taking on these tasks yourself. This will help you better understand what your vehicle is doing under certain operating conditions, and you'll be able to tune your carburetor to correct certain problems and extract the maximum performance from you engine.
There are literally millions of Holley carburetors in existence. The company was started by George Holley and his brother Earl in 1902, originally to build racing engines for motorcycles. They also produced motorcycles and some automobiles, but eventually began concentrating on fuel and ignition systems.
Since that time, Holley carburetors have appeared' on just about every type of vehicle you can think of. They've been used as original equipment by every major American automobile manufacturer at one time or another, and have been used extensively in high-performance aftermarket applications. Racers, boaters, off-roaders and hot-rodders have all discovered the merits of the Holley carburetor, Many farmers and ranchers are familiar with Holley carburetors as well - they've been used on tractors and other farm implements, as well as gasoline-powered generators and pumps, etc. As carburetors go, they have no equal.
Of the millions of these carburetors still in existence, all of them will need attention sooner or later. All of the carburetors built by Holley are extremely well made, are relatively simple to overhaul and easy to tune (although tuning a carburetor is usually a trial-and-error proposition). This manual unlocks the "mystery" of the Holley carburetor. Included are chapters on tools, fundamentals of operation, carburetor identification, troubleshooting, removal and installation, overhaul and adjustments, selection and modifications and general specifications.
At the end of the manual there's a glossary of terms used throughout the book. In short, everything you need to know to successfully deal with your Holley carburetor and realize its full potential!

MSRP: $66.95
Now: $39.95
Was:
By: A K Legg . The Haynes Weber Carburetor Manual Covers: Theory and operation Maintenance and tune-up Detailed overhaul procedures Application and reference tables Included in this manual...

MSRP:
Now: $75.00
Was:
By: Mike Stubblefield . The Haynes Rochester Carburetor Manual - This book covers all electronic and computer-command-control (CCC) carburetors as well as all earlier conventional models used by GM...

The Haynes Manual On Air Conditioning

The Haynes Manual on Brakes

The Haynes Manual on Diesel Engines - Maintenance, Troubleshooting and Repair

MSRP:
Now: $39.95
Was:
By: Martynn Randall . The Haynes Manual on Diesel Engines - Maintenance, Troubleshooting and Repair - All Cars and Light Commercial Vehicles - The definitive DIY manual on automotive diesel engines...

MSRP:
Now: $75.00
Was:
By: Mike Stubblefield . The Haynes Rochester Carburetor Manual - This book covers all electronic and computer-command-control (CCC) carburetors as well as all earlier conventional models used by GM...