The Triumph TR From 20TS to TR6 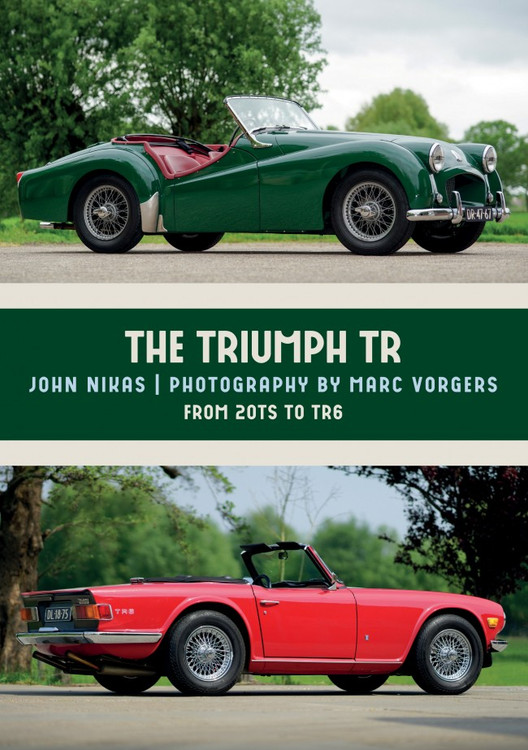 The Triumph TR From 20TS to TR6

a book by John Nikas, Photographs by Marc Vorgers, paperback, published in 2018, 96 pages

Considered among the most desirable sports cars ever built, Triumph’s TR series were renowned for their strong performance, rugged construction and iconic styling. Among the ranks of affordable sports cars, these legendary British automobiles introduced a host of innovations, including front disc brakes, independent rear suspensions and petrol injection, making them perennial sales and competition champions.

From the stillborn 20TS prototype, Triumph developed the revolutionary TR2, which debuted as the fastest model in its class and spawned the bestselling TR3 and TR3A. With Italianate styling from Giovanni Michelotti, the TR4 and TR4A represented a whole new direction for the range, while the TR5 became a performance standout with its Lucas petrol injection. The evergreen TR6 represented the final chapter for the traditional ‘hairychested’ British roadster, closing the book on one of the most successful families in motoring history.

Award-winning historian John Nikas examines the design and development of the various TR models, while also detailing the competition record that made Triumph such a formidable opponent on the track and international rally circuit. With readable and engaging prose set against beautiful colour portraits by Marc Vorgers and rare period photographs, this book provides all the information you need about TR sports cars.

MSRP:
Now: $89.95
Was:
By: Graeme White . In 1953, Standard-Triumph released a brand new two seater roadster which they named the Triumph TR2. In a market segment already dominated by British cars, this newcomer soon...

Triumph TR From Beginning To End

MSRP:
Now: $69.95
Was:
By: Brian Bate . This manual provides an insight into buying, building, maintaining and using light trailers safely and legally. Coverage extends to all types of common trailers, including car and...