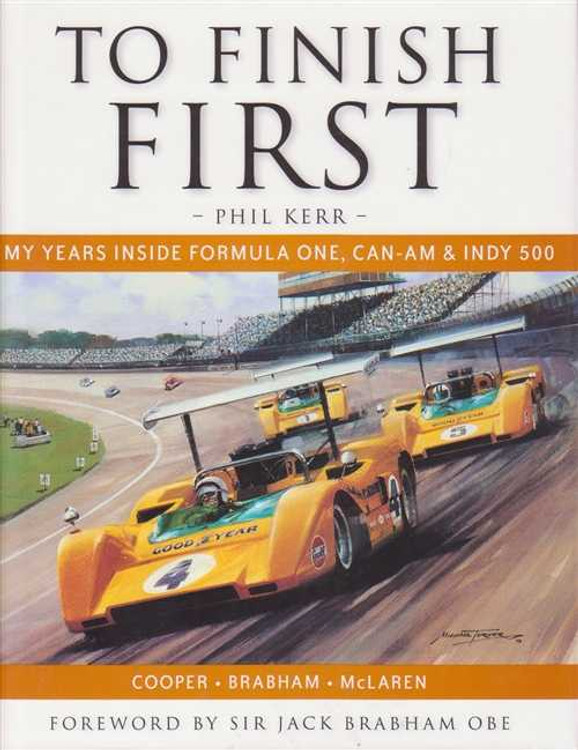 A Kiwi insider's evocative account of working with Bruce Mclaren, Jack Braham, Denny Hulme and many others during en era of motorsport marked by both Trimph and Tragedy.

The 1960s and '70s were the golden years of international motor racing and Phil Kerr was part of that world. From his teenage friendship with Bruce McLaren, to his years working in Formula One, Can-Am and the Indy 500, this book tells the inside story - the triumphs and the tragedies, the deals and the disasters. It was Jack Brabham who encouraged both Phil and Bruce to move to the UK, becoming not only a mentor but also having a major influence on their motorsport careers. This book sets out the inside workings of three of the great racing teams — Cooper, Brabham and McLaren — and Phil's accounts of the events and the many great drivers he has known are personal and highly evocative.

The text is accompanied by plentiful colour and black & white photos, many never published before.

New Zealander Phil Kerr moved to the UK in 1959 to work alongside Jack Brabham. He became a director of Brabham Racing Organisation and was with the team when Jack succeeded in winning three World Champion Driver titles. Phil subsequently joined McLaren Racing as joint managing director and Formula One team director. He remained there for many years, during which time the team suffered the tragic loss of Bruce McLaren. He was with the team as they went on to win their first Formula One World Championship and scored major successes in the Indy 500 and the Can-Am series. Upon returning to New Zealand, he continued working in the motor industry and maintained his interest in motor racing at a national level. Phil's company, McLaren Motorsport, has a website which encompasses motor racing history and memorabilia from the incredible era in which he was involved.

Ford Formula One Ten Years Plus

MSRP:
Now: $250.00
Was:
It has taken 15 years of relentless persuasion to convince Tony Brooks that he should write his autobiography. In the 1950s he revealed himself to be one of Britain's foremost grand prix drivers,...

Timo Bernhard - The Story of a Champion

MSRP:
Now: $39.95
Was:
By: David Fletcher, David Willey, Mike Hayton .**OCTOBER 2017 REPRINT** Description An insight into the history, development, production and role of the most feared battle tank of the Secon World...