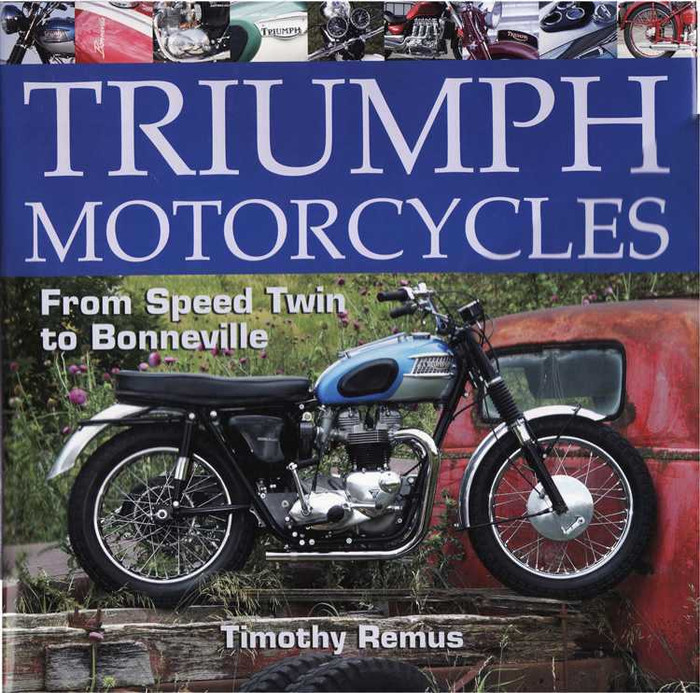 It started with the Speed Twin in 1938 and went on until 1983. During that time the Triumph Motorcycle Company produced everything from singles to triples, but mostly they produced vertical twins. Some of the fastest and best looking vertical twins ever produced. Good enough to be copied first by the other English motorcycle companies, later by Japan and eventually by the New Triumph Company.

Most of those vertical twin models are included here, with a few triples to boot. Open the pages to Speed- Twins, T100s, T110s, Cubs, Trophys, TR6s and all the Bonnevilles from 1959 to 1970. Photographed by well-known motorcycle photographer Timothy Remus and reproduced on heavy art-quality paper, these bikes have never looked better.

Whether viewed as two- wheeled sculpture, icons or simply motorcycles, the Triumphs presented here represent the best of an age gone by.

From Timothy Remus and Wolfgang Publications comes a new look at some of the finest classic bikes ever manufactured. Triumph Motorcycles, is a new, all color, hardcover book focused entirely on Triumph twins and triples. Starting with Edward Turner's best-known design, the Speed-Twin, the book moves to the T 100, TR5, Thunderbird, TR6, Bonneville and all the rest. Using a large format and deluxe paper, this anthology of classic triumphs covers all the significant models produced from 1938 to the early 1980s. The Triumph story doesn't stop there however. The "new" Triumph corporation, under the guidance of John Bloor, took up the challenge of producing modern motorcycles, many of which are included in this same book.

Whether your personal favorite is the ever-popular Bonneville from the late 1960s, or a more obscure TR5 with "generator" top end, the Triumphs you remember and lust after are sure to be found between the hardcovers of this new book.

MSRP:
Now: $129.95
Was:
By: James Mann, Mick Duckworth . Description This sumptuous book is a celebration of Britain's most famous motorcycle — the Triumph Bonneville. Launched for 1959, the legendary Bonneville was...

MSRP:
Now: $89.99
Was:
From the 1950s through to the 1970s, the late Hughie Hancox worked at the Triumph Meriden factory in various capacities - a fitter, a member of the famous Royal Corps of Signals Motorcycle...

Triumph Spitfire and GT6 - A Guide to Originality