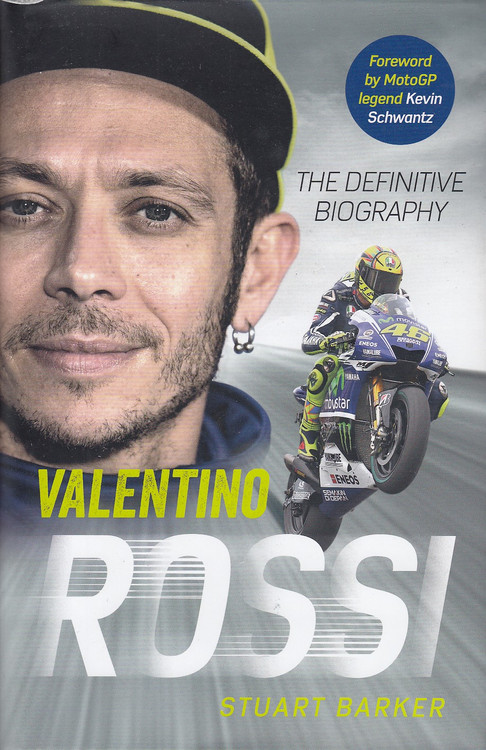 Valentino Rossi is an icon: the most successful and most loved motorcycle racer of all time, he has transcended MotoGP to become a symbol of courage, risk and daring. To race for twenty-three years at the very highest level of the world's most dangerous sport is unprecedented. But then, there has never been a motorcycle racer like Valentino Rossi. He is a modern-day gladiator, a man who still risks his life every time he throws a leg over a motorcycle.

Yet for all his two-wheel talents, it is Rossi's endearing character that has seen him transcend the sport. His popularity is phenomenal. For Rossi, every race is a home race. He turns MotoGP grandstands across the world a sea of yellow - his traditional lucky colour.

In more than two decades of Grand Prix racing, Rossi has seen it all. The deaths of rivals and friends, the glory of his unprecedented success, serious injuries, fabulous wealth, the greatest battles ever seen on two wheels, the infamous on and off-track clashes with his fiercest rivals . . .

Using exclusive new interviews with those who have been part of Rossi's story from start to finish, critically-acclaimed and bestselling motorsport author Stuart Barker has produced the most in-depth book ever written about the Italian superstar - a tale of speed, love and loss, told in full for the very first time, in all its adrenalin-charged, high-octane glory.

Valentino Rossi Life of a Legend by Michael Scott

MSRP:
Now: $69.95
Was:
From the day he was born into a racing family on February 16, 1979, Rossi was destined for racing greatness. Rossi started his international racing career in 1996, riding for Aprilia in the 125cc...

MSRP:
Now: $79.95
Was:
By: Mat Oxley . This book celebrates motorcycle racing's main man: Valentino Rossi. With the help of dramatic photography, it portrays his high-speed life from his earliest days on minibikes to his...

MSRP:
Now: $79.95
Was:
By: Apach . The Sport Profiles collection gets off to a flying start with this book about the new idol of the Grand Prix circuit. Sports Photography provides us with a portrait that is a little bit...

Smoke and Mirrors Cars, Photography and Dreams of the Open Road

We Need to Weaken the Mixture (Guy Martin)

MSRP:
Now: $50.00 - $200.00
Was:
Published in 2020 FROM THE AUTHOR: Originally the book was to be a collection of photos but having been associated with the boys from JWF from the very beginning, I felt there was a story here that...