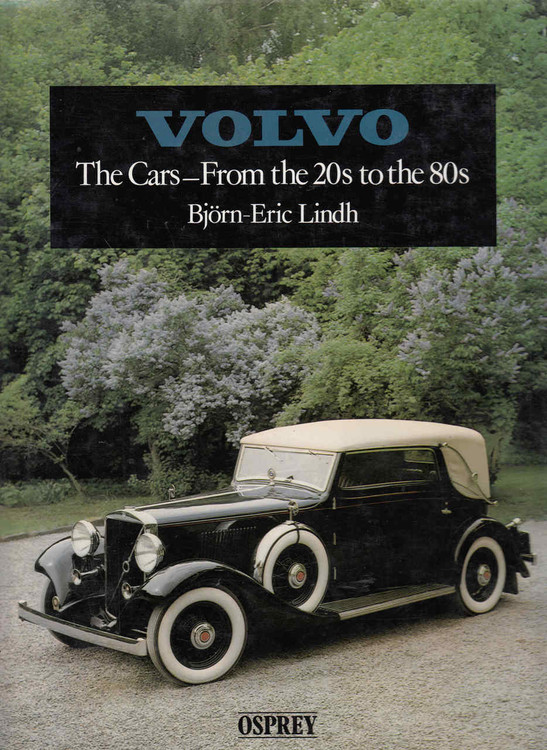 Today, all over the world the name of Volvo is associated with quality, economy and power. But it wasn't until the mid-fifties that Volvos began to be sold outside Sweden in any numbers. Now about 85% of all Volvos are sent for export—in the U.S. market, for instance, Volvo is even the largest imported make.

This book is a complete history of Volvo motorcars, from the first tentative efforts in the middle of the twenties, via the U.S.- inspired cars of the thirties, to what was to prove the turning-point in their history—the PV444, which really turned out to be a lucky number for Volvo and paved the way for the export successes enjoyed by the PV544, the Amazon/120 and the 140/160 series during the following years.

During the seventies the company ran into problems; but by staking everything on product development and quality control Volvo has now become one of the world's most successful automobile manufacturers and is today the largest engineering industry in Scandinavia.

With the Dutch-made 340/360 series and the Swedish-made 240 and 740/760 series, Volvo has forged ahead in a number of important export markets, including the U.S.A., England, France and Italy.

The book also describes all Volvo sports models, experimental vehicles and many prototypes which never got as far as production.

All models are described in words and pictures, the latter comprising over 300 black-and-white photographs, many never published before.

All Volvo models produced before the mid-fifties have been rephotographed in colour in natural settings by the well-known automobile photographer Peter Haventon. In all, the book contains almost 200 colour illustrations.

Bjorn-Eric Lindh is one of the best-known and best-informed of Swedish motor historians. For 14 year's he was editor of Autohistorica, the journal of Automobilhistoriska Klubben, during which time he had ample opportunity of doing research in both Swedish and foreign automobile history.

He has contributed to specialized journals in Sweden and abroad, and was for a period a curator at the Museum of Science and Technology in Stockholm.

At present he devotes much of his time to writing and translation.(1984)

He has been a member of many club Boards and works now for Motorhistoriska Riksforbundet (the Swedish Federation of Collector Car Clubs), where he handles matters about registration, inspection, taxation and insurance of collector's vehicles.

He is also President of the Technical Committee of FIVA, Federation Internationale des Vehicules Anciens.

At present he has reverted to his first love and is in the process of restoring two M.G.s dating from the thirties.

Curiously enough, although he has researched the history of Volvo in greater detail than anyone also, he has never owned a Volvo! The closest he ever got to being a real Volvo-owner was a quarter share in an extremely well-used Volvo Duett used during the seventies for yearly trips to England with the other owners to bring home more parts for their old M.G. cars!

Bjorn-Eric Lindh is married and lives in Stockholm with his wife, two daughters and their two Siamese cats. Along with his wife he runs a bookshop specializing in Swedish and imported litterature on motorcars, the MarGie Bookshop.

Car-Tastrophes - 80 Automotive Atrocities From The Past 20 Years

MSRP:
Now: $79.95
Was:
By: Richard Dredge . It was in 1924 that economist Assar Gabrielsson and engineer Gustaf Larson first discussed the idea of setting up a company to manufacture cars. In Sweden at that time only...

MSRP:
Now: $66.95
Was:
By: Haynes . Description Written from hands-on experience gained from the complete strip-down and rebuild of several Volvo S60s in our Project Workshop, this manual can help you understand, care for...

Volvo Down Under - A Swedish Success Story

MSRP:
Now: $59.95
Was:
By: Brooklands Books . With the PV444 Volvo broke into the major markets of Europe and the USA, thereby establishing the marque outside its home country of Sweden. Full production did not get under...