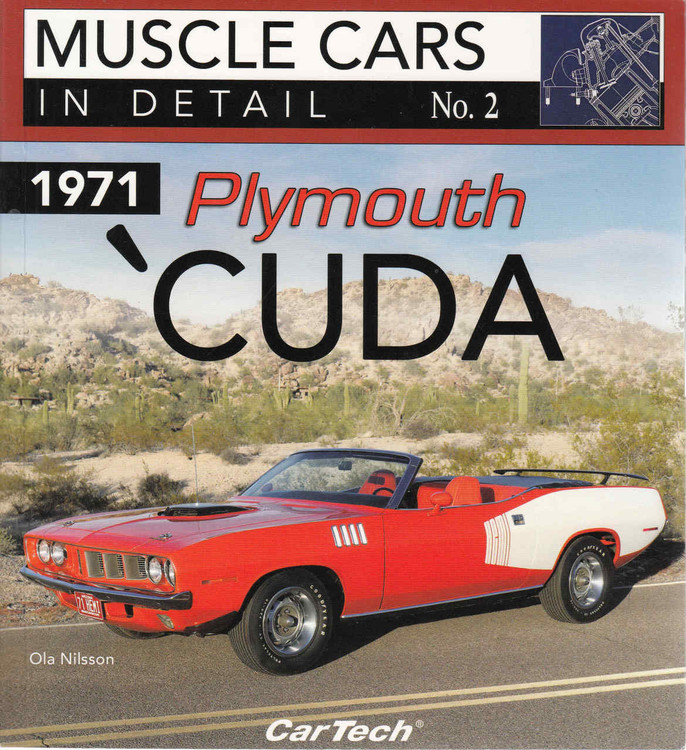 When the Barracuda arrived in the Plymouth lineup in mid-1964, it was given an unbearable task: to compete against the new Ford Mustang.

Unfortunately, out the gate, it was outsold by a 6-to-1 margin.

Barracuda could always compete with Mustang in the performance category, but aesthetically it just wasn't as accepted as its Mustang and Camaro counterparts. That was until 1970, when a complete redesign from the A-Body platform to the E-Body platform turned the tide.

When ordering a 'Cuda, owners could lay waste to Mustang and Camaro owners with such stout engine packages as the 440-6 and 426 Hemi.

Sales numbers never did match those of its crosstown rivals, but in the end, the 1971 'Cuda won the war. No other mass-production pony car can consistently claim asking prices of $2 million for its top model (in today's prices).

Each volume in the In Detail Series provides an introduction and historical overview, an explanation of the design and concepts involved in creating the car, a look at marketing and promotion, an in-depth study of all hardware and available options, as well as an examination of where the car is on the market today.

Also included are paint and option codes, VIN and build-tag decoders, as well as production numbers.

Ola Nilsson began his obsession with the Plymouth E-Body 'Cuda just before he earned his driver's license at the age of 17. As an airline pilot by trade he has been afforded the luxury of traveling to see many of these rare cars and their caretakers.

His contributions to the hobby are noted on many website forums and through his administration of the 1970-71 Plymouth and Dodge E-Body Convertible Registry.

MSRP:
Now: $49.95
Was:
By: Brooklands Books . Plymouth had already produced the Fury by this time and were making changes to the styling to reduce weight. The Barracuda was introduced a few weeks before the Mustang in...

The Art Of Mopar - Chrysler, Dodge, and Plymouth Muscle Cars