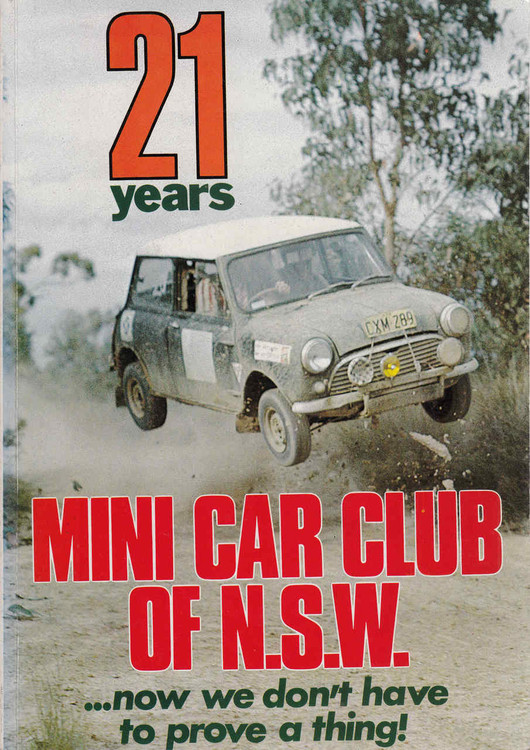 In mid-1962, a group of Mini fanatics got together in Banks-town, Sydney, to "do something" about formalising their Mini-based comradeship. The result was the formation of the Mini Car Club OfNew South Wales, which was soon to become one of the largest and most active Clubs in the State. And it still is.

The Club was, not surprisingly, motorkhana oriented for many years, giving way to rally and speed competitions in the late 60's, with that three-coloured complexion remaining today.

Soon after its incorporation, and further to (then) B.M.C.'s request, the Club became the Morris 850 Car Association of NSW. Since times, of course, "850" was dropped, in favour of "Mini", with the Club reverting to the Mini Car Club of NSW in 1976, having scrapped the outdated "Morris" and the no longer appropriate "Association".

During the first eight or so years, the Club's membership numbers tended to mirror Mini sales charts and popularity. 1964 saw more than 400 financial members in Sydney Branch, with over 700 members State-wide in the mid 60's. By 1970, however, numbers had slipped to around 300, in line with the loss of the car's "novelty" appeal, and falling sales. Happily, membership has remained at this level, with the "core" of active members, about 60, being as strong as ever. The "collector's item" value of early Minis, the fuel crisis and other factors suggest that satisfactory membership numbers will remain for many years.

Soon after formation, the Club spawned the Morris 1100 Car Association, to promote the "big" Mini and cater for its owners. That Club went through several name changes....

MSRP:
Now: $29.99
Was:
By: Arvid Linde . Description What if we all had to say goodbye to petrol cars tomorrow? Would you be ready? This book will help you find out All you really need to know about electric cars A...

MSRP:
Now: $129.99
Was:
By: Tony Thacker . In 1931, Henry Ford announced that his company would produce an eight-cylinder car, if only because its competitors were building fours and sixes. The result, introduced in 1932,...