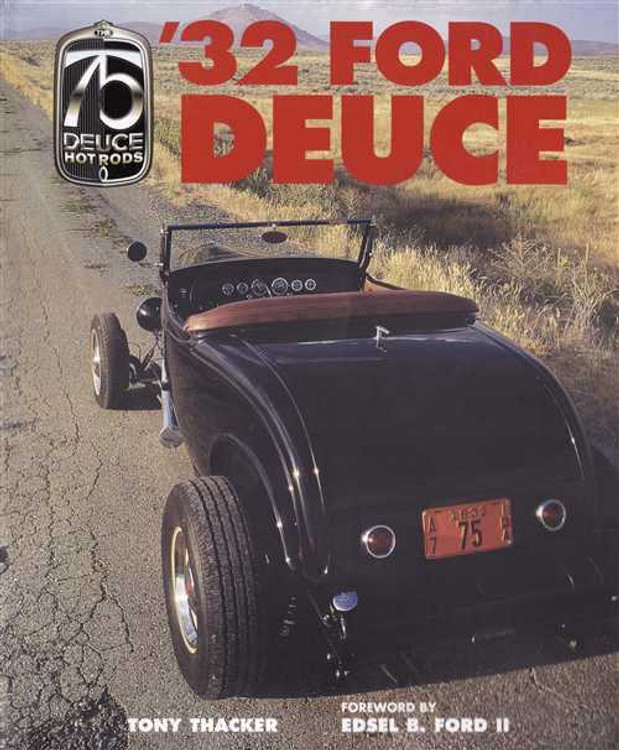 In 1931, Henry Ford announced that his company would produce an eight-cylinder car, if only because its competitors were building fours and sixes. The result, introduced in 1932, was Ford Motor Company’s first V8-powered car.

The “Deuce” was a design and technological milestone that would become the quintessential hot rod platform. Arriving just in time for the Deuce’s 75th anniversary, this complete authoritative and illustrated history looks at every facet of the Deuce’s story: factors leading to its design, how it was manufactured and sold, the development of the now-legendary flathead engine, and motorsport exploits around the globe. And, of course, there are the hot rods: the 75 most influential ’32-based hot rods as chosen by a who’s who of the hot rod community. From the pacesetting Doane Spence roadster to Chili Catallo’s Lil’ Deuce Coupe, the American Graffiti coupe, and the cars of such hot rodding legends as Gray Baskerville, Ray Brown, Boyd Coddington, Ak Miller, and Veda Orr—each of the 75 vehicles gets its own spread, with rare and famous photographs and detailed descriptions of the car’s history, mechanics, and design.

Produced in cooperation with Ford Motor Company, this spectacular book, for vintage-car enthusiasts and hot rodders alike, also includes a foreword by Edsel B. Ford II, grandson of the Deuce’s principle stylist.

Publisher's Note: In 2007, Ford Motor Company will launch a yearlong tour of the "75 Most Significant Deuce Hot Rods" that will display several of the cars - some are still missing - at shows and events across the U.S.

4 Wheel and Off Road Chassis and Suspension Handbook

MSRP:
Now: $89.95
Was:
By: Editors of Petersen's 4Wheel Off-Road Magazine . 4 Wheel & Off Road Chassis & Suspension Handbook - This guide will help you build the ultimate off-road vehicle for maximum...

MSRP:
Now: $69.95
Was:
By: Bill Starrett . Introduction: This book was originally prepared for use as a series of texts, used to give a group of newcomers to "four cycle" kart racing a foundation for...