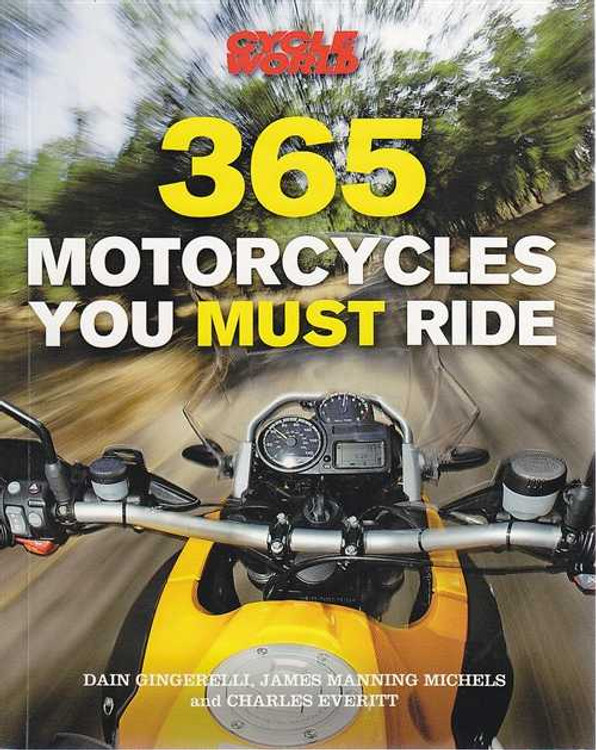 Motorcycles have come a long way since Gottleib Daimler bolted an internal engine to a wooden-wheeled velocipede. Among the thousands of great, near-great, and downright awful motorcycles built since then, many stand out as icons, or as engineering or cultural landmarks. Your opinions might differ, but you wouldn’t want to miss out on the bikes Everitt identifies as rides-of-a-lifetime. These 365 must-ride motorcycles range from classic gaslight-era bikes, racers, and modern sportbikes to oddities that have to be ridden to be understood (or believed).

From the 2007 Ducati 999R to the 1909 Harley-Davidson Silent Grey Fellow, 365 Motorcycles You Must Ride promises hours of entertainment (and a thrilling to-do list) for any motorcycle enthusiast.

Learn To Ride - Everything You Need To Pass Your Motorcycle Test

The Ride - New Custom Motorcycles and Their Builders

You Have Been Warned - A Complete Guide To The Road (Fougasse and McCullough) Hardcover 9th Edn. 1937

Motorcycle Touring - Everything You Need To Know

MSRP:
Now: $59.95
Was:
By: Dr. Gregory W. Frazier . The popularity of motorcycle tour riding is increasing steadily, but riders taking off on extended trips must realize there are unique hazards they can face when riding...

MSRP:
Now: $129.99
Was:
By: Tony Thacker . In 1931, Henry Ford announced that his company would produce an eight-cylinder car, if only because its competitors were building fours and sixes. The result, introduced in 1932,...

MSRP:
Now: $69.95
Was:
By: Bill Starrett . Introduction: This book was originally prepared for use as a series of texts, used to give a group of newcomers to "four cycle" kart racing a foundation for...

4 Wheel and Off Road Chassis and Suspension Handbook

MSRP:
Now: $89.95
Was:
By: Editors of Petersen's 4Wheel Off-Road Magazine . 4 Wheel & Off Road Chassis & Suspension Handbook - This guide will help you build the ultimate off-road vehicle for maximum...

MSRP:
Now: $59.95
Was:
By: Gregory's . 4WD Mechanic is designed to enlighten the 4WD owner in the basic workings of the modern off-road vehicle and to provide generalised repair and testing procedures for the majority...