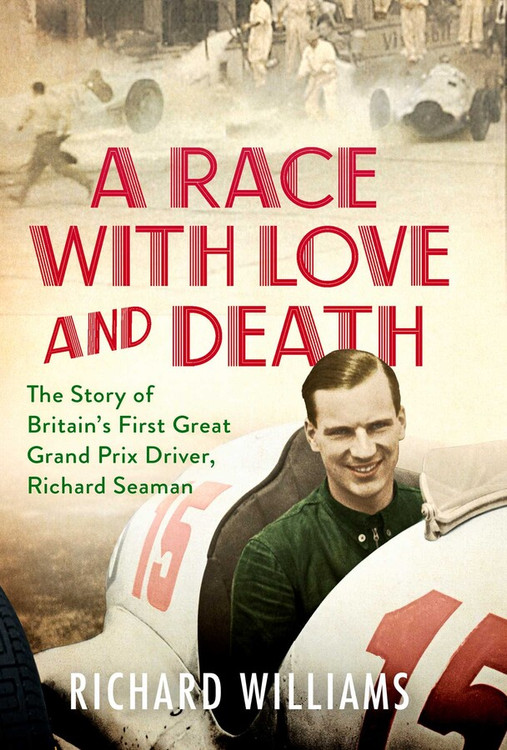 'A tragic age and a tragic character, both seemingly compelled to destroy themselves...a chilling reminder of how little control we have over our fates' Damon Hill
'One of the greatest motor racing stories' Nick Mason
'Timely, vivid and enthralling … it’s unputdownable’ Miranda Seymour, author of The Bugatti Queen

Dick Seaman was the archetypal dashing motorsport hero of the 1930s, the first Englishman to win a race for Mercedes-Benz and the last Grand Prix driver to die at the wheel before the outbreak of the Second World War.

Award-winning author Richard Williams reveals the remarkable but now forgotten story of a driver whose battles against the leading figures of motor racing's golden age inspired the post-war generation of British champions. The son of wealthy parents, educated at Rugby and Cambridge, Seaman grew up in a privileged world of house parties, jazz and fast cars. But motor racing was no mere hobby: it became such an obsession that he dropped out of university to pursue his ambitions, squeezing money out of his parents to buy better cars. When he was offered a contract with the world-beating, state-sponsored Mercedes team in 1937, he signed up despite the growing political tensions between Britain and Germany. A year later, he celebrated victory in the German Grand Prix with the beautiful 18-year-old daughter of the founder of BMW. Their wedding that summer would force a split with his family, a costly rift that had not been closed six months later when he crashed in the rain while leading at Spa, dying with his divided loyalties seemingly unresolved. He was just 26 years old.

A Race with Love and Death is a gripping tale of speed, romance and tragedy. Set in an era of rising tensions, where the urge to live each moment to the full never seemed more important, it is a richly evocative story that grips from first to last.

Richard Williams
Richard Williams was the chief sportswriter of the Guardian from 1995 to 2012, having previously worked for The Times and the Independent. He was the original presenter of BBC2's The Old Grey Whistle Test and was the artistic director of the Berlin Jazz Festival from 2015-17. Among his previous books are The Death of Ayrton Senna (1995), Racers (1997), Enzo Ferrari: A Life (2002) and The Last Road Race (2004).

MSRP:
Now: $59.95
Was:
Expanding from the previous edition of High-Performance Ford Parts Interchange that covered both small- and big-block engines in one volume, this book cuts out the small-block information and devotes...

MSRP:
Now: $59.95
Was:
Author Mike Mavrigian guides you through each important stage of the Holley carb rebuilding process, so you have the best operating carburetor for a particular engine and application. In addition, he...

MSRP:
Now: $74.95
Was:
A 1986 NHRA Hall of Fame member, Hubert Platt’s lasting legacy on the sport can’t be denied. Whether he was launching his Falcon with the door open, conducting a Ford Drag Team seminar,...

MSRP:
Now: $57.50
Was:
Author Steve Magnante is well known for his encyclopedia-like knowledge of automotive facts. The details he regularly shares, both in the pages of national magazines and as a contributing host and...