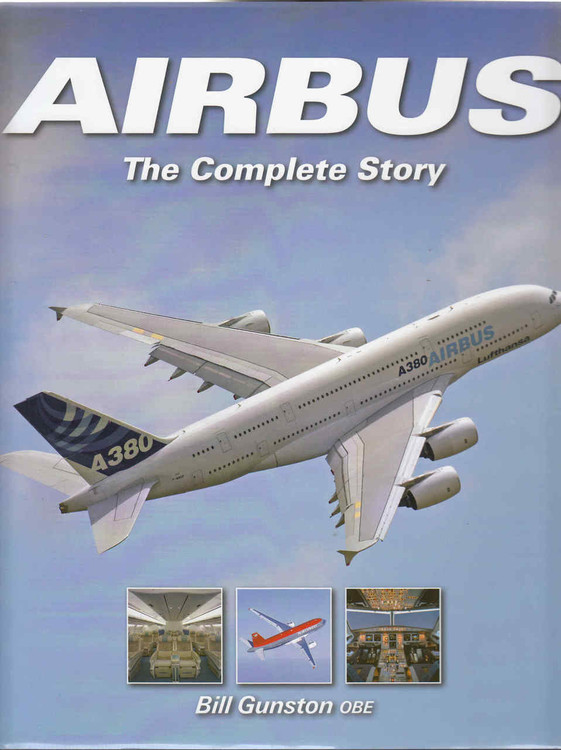 European plane-builder Airbus has established a global reputation that is second to none.

With constituent companies in France, Germany, Spain and the UK, Airbus is a multinational partnership. Another country that is deeply involved is the USA, which from the outset has played a major role in supplying engines, avionics and high-cost systems. For a much longer period Belgium, the Netherlands, Italy and Australia have been among the many countries contributing airframe parts.

In recent years China's rapidly growing industry has been assisted by subcontracting for Airbus, leading in 2008 to the opening of a Chinese A320 assembly line. The USA is now also scheduled to become home to a major Airbus assembly plant.

But it was not always like this: the Airbus success story has been a tale of eventual triumph over prolonged adversity. Political interference early in the life of the company by the British government almost led to BAC and Hawker Siddeley being written out of the Airbus partnership.

Bill Gunston tells the story of how the original Airbus A300B was conceived, how the international Airbus company was formed, and how it has now grown to become an aerospace giant. This fully revised and updated second edition includes all the prolific single-aisle aircraft that have followed the A320, the great new wide-bodies (the A330 and four-engine A340), the enormous A380 (an amazing saga dominated not by the technology but by politics and finance), the totally different A400M military airlifter and, not least, the extraordinary stop-start gestation of the A350.

Bill Gunston's 'inside story' is a tale without parallel of Europe's 'Boeing-beater'. Bill was a consultant in the original launch of Airbus, which required him to visit Toulouse regularly, ferried in a 125 which usually started at Chester, called at Hatfield, and then (to pick up Bill) at Dunsfold. It is a sad reflection on Britain's diminished role in aerospace that Hatfield and Dunsfold no longer exist.

MSRP:
Now: $149.95
Was:
By: John Tipler . The Lotus Elise is the latest in a long line of charismatic sports cars from the company started by Colin Chapman in 1948, and it embodies many of the features he believed were...

The Road Ferraris The Complete Story

MSRP:
Now: $89.95
Was:
By: John Tipler . TVR today is a highly respected manufacturer of quality sports cars. The company has not always been so successful: in its formative years during the 1950s and early 1960s it went...

MSRP:
Now: $69.99
Was:
By: Keith Seume . The Volkswagen Beetle is one of the world's most popular cars. So, it's no wonder people who own them are into modifying and tuning the engines. Aircooled VW Engine Interchange...

AJS And Matchless Post-War Singles And Twins - The Complete Story

MSRP:
Now: $54.95
Was:
Airbus A380 Manual Designed to challenge Boeing's monopoly in the large aircraft market, the A380 super-jumbo made its first flight in 2005, entering commercial service two years later. So...

MSRP:
Now: $49.95
Was:
By: Timothy Remus .  Description Airbrush Bible offers something for anyone interested in the art of airbrushing. This new book from Wolfgang Publications offers how-to sequences done with...

Against Death And Time - One Fatal Season In Racing's Glory Years

MSRP:
Now: $95.00
Was:
By: Brock Yates . Against Death and Time is a chronicle of one fatal season, 1955, in the postwar glory years of racecar driving. It is the story of the reckless, dispossessed young men who raced...

Aerodynamics For Racing And Performance Cars

MSRP:
Now: $59.95
Was:
By: Forbes Aird . Aerodynamics For Racing And Performance Cars - The book offers a basic explanation of vehicle aerodynamic theory, principles and application. All information is presented in easy...