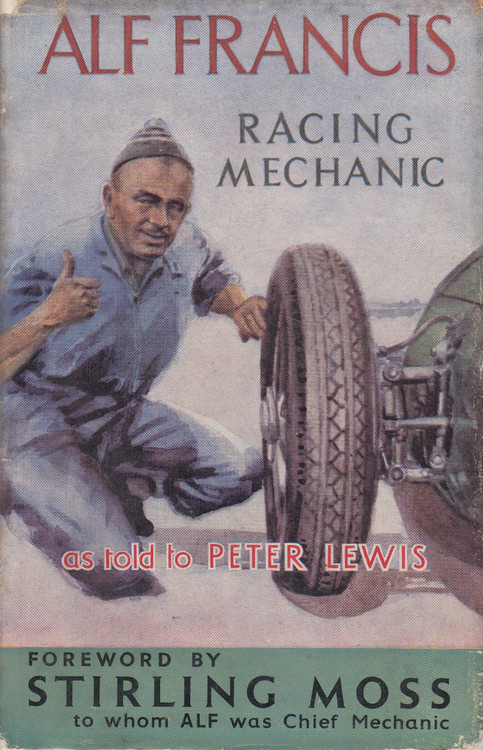 There are few jobs more exacting than that of a racing mechanic. Hard slogging work to build the car, months of planning, designing and alteration is followed by hectic last minute preparation.

Then follows the racing season entailing long drives in the transporter from one venue to another, perhaps half across Europe, only to find some fault during practice which necessitates day and night work in order to appear on the grid the next morning. Alf Francis has given to Peter Lewis a most graphic and in fact thrilling insight into the hardships, the hopes and disappointments, with sometimes ambition achieved when the car comes first past the chequered flag.

This book will be of inestimable value not only for its vivid picture of motor racing as seen by those who prepare the car and bring it to the start, but also for its intimate account of the H.W.M., its founders, and its racing, the first inside story of Stirling Moss's season of racing with his own Maserati, and now R. R. C. Walker's Cooper Climax which Stirling Moss drove to victory in the Argentine.

MSRP: $150.00
Now: $99.95
Was:
By: Alex Moulton . FOREWORD There are few people whose name is synonymous with a product. Alexander Eric Moulton is such a person. Any cycling enthusiast would immediately recognise the Moulton...

MSRP:
Now: $199.95
Was:
By: Factory . FOREWORD This workshop manual is intended for use by workshops belonging to the ALFA ROMEO Service Organization. It contains all necessary instructions for tune up, repair and...

MSRP:
Now: $99.95
Was:
By: Gianluca Gasparini . With 13 laps to run in the CART Champ Car race on the Lausitzring oval in Germany on 15 September 2001, Alex Zanardi completed his final pit stop and headed back to the...

MSRP:
Now: $95.00
Was:
By: Factory . This book is a supplement to main repair manual covering Alfa Romeo 33 models from 1986 onwards.   Other Details Publisher Code: ALFA33SSUPP ISBN...