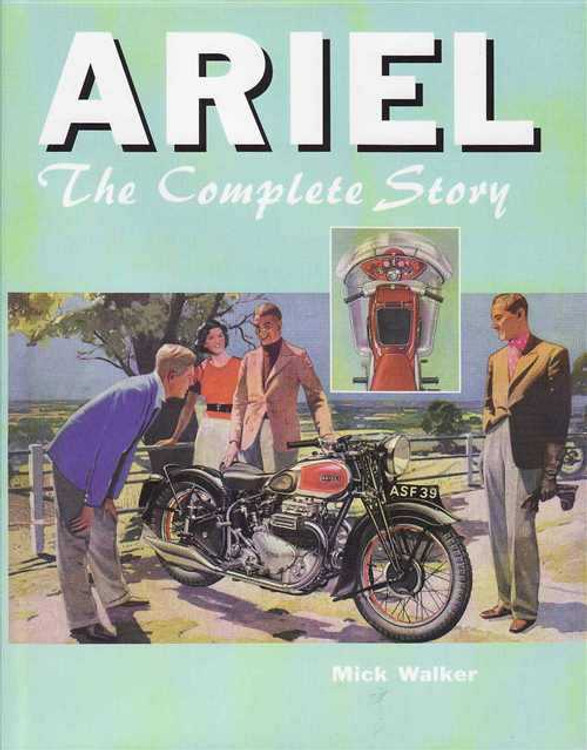 Ariel was one of the mainstay British motorcycle companies from its foundation in 1902 until its ultimate demise in 1965. During this time it produced many famous models from small-capacity commuter bikes right through to 1000cc four-cylinder superbikes.

Much of the early history of Ariel was overseen by the Sangster family, who became key figures in the birth and growth of the British motorcycle industry, and some of the greatest designers worked for Ariel over the years – men like Val Page, Bert Hopwood and Edward Turner.

Val Page was with Ariel, off and on, from the mid-1920s until the late 1950s. His first contribution was a series of single-cylinder models with ohv and side-valve engines, the basics of which would endure until the end of the 1950s, when a brand-new series of 250cc two-stroke twins – the Leader and, later, the Arrow – came from the pen of the same man. Edward Turner's most enduring contribution to Ariel was the immortal Square Four, most famous in its 1000cc version, but he also helped revitalize Ariel in the mid-1930s with the introduction of the famous Red Hunter range of sporting ohv singles.
Post-war, as part of the giant BSA group, Ariel slowly lost its independence, but not before a new range of parallel twins with 500cc and 650cc engines was introduced.

Ariel also enjoyed notable success in motorcycle sport – in road racing, motocross and, most of all, trials. In the latter, Sammy Miller's exploits on his lightweight 500cc HT5 are the stuff of legend.
In this comprehensive work, leading motorcycle historian Mick Walker brings the reader details of not only the bikes, their designers and their riders, but also the tempestuous politics of the motorcycle industry seen through the eyes of the Ariel brand name.

MSRP:
Now: $39.95
Was:
By: Brooklands Books . The two-stroke Leader introduced in 1958 was revolutionary with a 250 twin-cylinder engine and monocoque pressed steel frame. The Arrow followed in 1960, this being essentially...

Arlen Ness - The King of Choppers

MSRP:
Now: $89.95
Was:
By: Arlen Ness, Michael Lichter . In the beginning, there was Arlen Ness. Before Jesse James, Billy Lane, and the battling Teutuls, Arlen Ness started the business of building celebrity choppers. He...

MSRP:
Now: $129.95
Was:
By: John Wright . The latest in the respected series of Marque Classic books covers one of the most fascinating of all British cars, the Armstrong Siddeley. Famed car historian John Wright has...