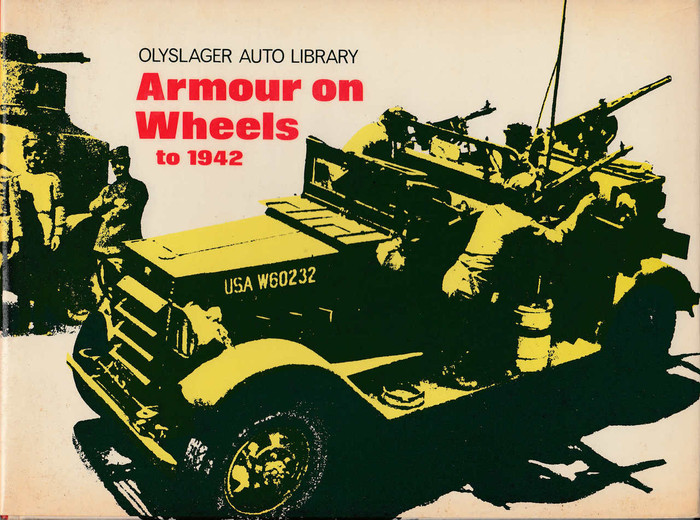 Wheeled combat vehicles have always played an important role in warfare and were by no means done away with when that fearsome land battle ship—the tank—appeared in the First World War.
Hundreds of types of armoured vehicles were made and used from the turn of this century, including scout cars, reconnaissance cars, personnel carriers, observation posts and command vehicles. This volume tells their story, in pictures with detailed captions.
Some 200 vehicles from more than 15 countries are illustrated, covering the period from the earliest days up to and including the 1939-41 Blitzkrieg.

The Observer's Book of Automobiles (Compiled by Olyslager Organisation, 1977)

MSRP:
Now: $25.00
Was:
The Observer's Book of Automobiles (Compiled by Olyslager Organisation, 1977) - 2nd hand book in excellent / like new condition.

The Observer's Book of Automobiles (Compiled by Olyslager Organisation, 1974)

MSRP:
Now: $25.00
Was:
The Observer's Book of Automobiles (Compiled by Olyslager Organisation, 1974) - 2nd hand book in excellent / like new condition.

Arlen Ness - The King of Choppers

MSRP:
Now: $89.95
Was:
By: Arlen Ness, Michael Lichter . In the beginning, there was Arlen Ness. Before Jesse James, Billy Lane, and the battling Teutuls, Arlen Ness started the business of building celebrity choppers. He...

MSRP:
Now: $75.00
Was:
By: Mick Walker . Ariel was one of the mainstay British motorcycle companies from its foundation in 1902 until its ultimate demise in 1965. During this time it produced many famous models from...

MSRP:
Now: $69.95
Was:
By: John Wright . The latest in the respected series of Marque Classic books covers one of the most fascinating of all British cars, the Armstrong Siddeley. Famed car historian John Wright has...

Armstrong Siddeley Motors - The Cars, The Company and The People in Definitive Detail

MSRP:
Now: $279.99
Was:
By: Bill Smith . John Davenport Siddeley, and the companies to which he lent his name, played an important role in the history of the British automotive industry. The Armstrong Siddeley marque was...

Armstrong Siddeley - The Sphinx With The Heart Of A Lion

MSRP:
Now: $199.00
Was:
Author: Bruce Lindsay. This entirely new book on Armstrong Siddeley follows the same format as this author’s previous title, LANCIA – 70 Years of Trailblazing. Every production model is...