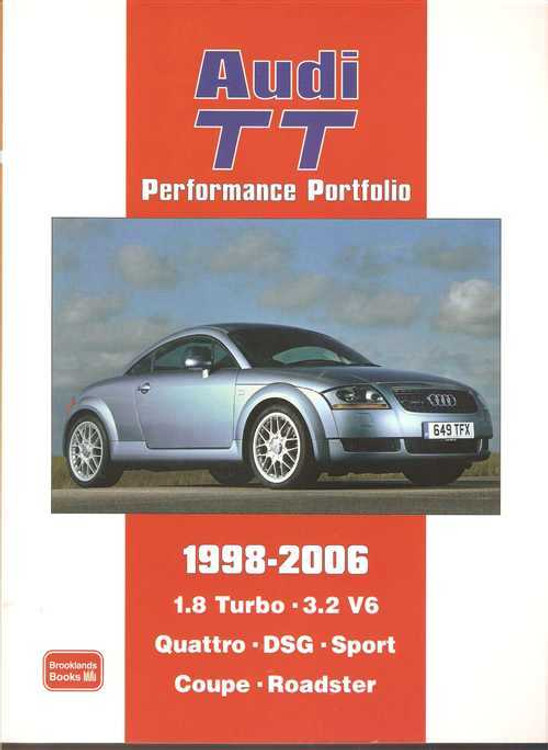 With rival German manufacturers coming out with sports cars in the mid to late 1990s it was obvious that Audi would have to come up with one of its own. Where the others introduced fairly conventional and predictable sports cars, Audi came up with something different. First shown as the TT coupe concept at the 1995 Frankfurt Motor Show and then soon afterwards as the TT convertible at the Tokyo Motor Show, the cars heralded a new design language from Audi the Bauhaus style from the 1930s that looked a little brutal at first but has proven to have a long and successful production life. Media and public acclaim assured Audi that it was onto a good thing.

It took another three years for the development and production processes to be completed, the Audi TT arriving on the European market for the 1999 model year. America followed a little later. Interestingly, where the senior Audi models, the A4, A6 and A8, have their engine and transmission sited longitudinally in the car, the Audi TT was based on the smaller A3 platform that was in turn based on that of the Volkswagen Golf which meant that the mechanical components were sited transversely. After a slow start sales picked up and have remained strong ever since, even up to the release of the second generation.

The TT's image was momentarily tarnished by some aerodynamic irregularities that were quickly sorted out and from then on it has been a process of steady development with both front wheel drive and four wheel drive Audi's famous Quattro system being available as well as a powerful 3.2-litre V6 engine to supplement the 1.8 litre naturally aspirated and turbocharged fours. The media loved the Audi TT and continued to write glowing reports about it even though it was six years old in the marketplace. In today's fast-moving market where products seem to have an ever-shortening shelf life, the Audi has proven to be a stayer, outlasting the M-B SLK, Z3 and Boxster by quite some time. A new model was released in mid 2006 to replace the original and to nobody's real surprise Audi's designers have not ventured far from the original styling cues. As they say in advertising circles, when you're onto a good thing, stick to it!

MSRP:
Now: $59.95
Was:
By: Brooklands Books . Alpina started in the mid-1960s as the purveyor of tuning accessories. By the time the first cars in this book were built they were a sophisticated entity and put together as a...

MSRP:
Now: $79.95
Was:
By: Brooklands Books . The two-seater Viper was designed as a "back-to-basics" model to evoke the excitement of cars like the Cobra. It is no retro-car; it incorporates all the technological advances...

MSRP:
Now: $49.95
Was:
By: Brooklands Books . Experts from four continents comment on the second generation of Japan's only real iconic sports car the MX-5. Models covered include 1.6i, 1.8i and Sport, the Turbo and...

MSRP:
Now: $49.95
Was:
By: Brooklands Books . This car started out with the name Celica Supra but is a very different car from the ordinary Celica. The Mk II models were on sale from 1982 to 1985 and had a major redesign...

MSRP: $295.00
Now: $259.95
Was:
By: Bentley . Description Service to Audi owners is of top priority to Audi and has always included the continuing development and introduction of new and expanded services. Whether you're a...

MSRP:
Now: $30.00
Was:
By: Ian Wagstaff . Description The history of the world's most successful endurance racing car: the Audi R8, featuring reports of all of its 80 races, plus profiles of the 35 drivers who raced the...

Augie Pabst - Behind The Wheel

MSRP:
Now: $189.95
Was:
By: Reinhard Klein . Description  "I was a fan of the Quattro even before I drove it for the first time." After more than twenty-five years, double World Rally Champion, Walter...

MSRP:
Now: $125.00
Was:
By: Laurence Meredith . The quattro wasn't the first car to boast permanent four-wheel drive, turbocharger or 5-cylinder engine, but it did combine all of these innovations for the first time in a...