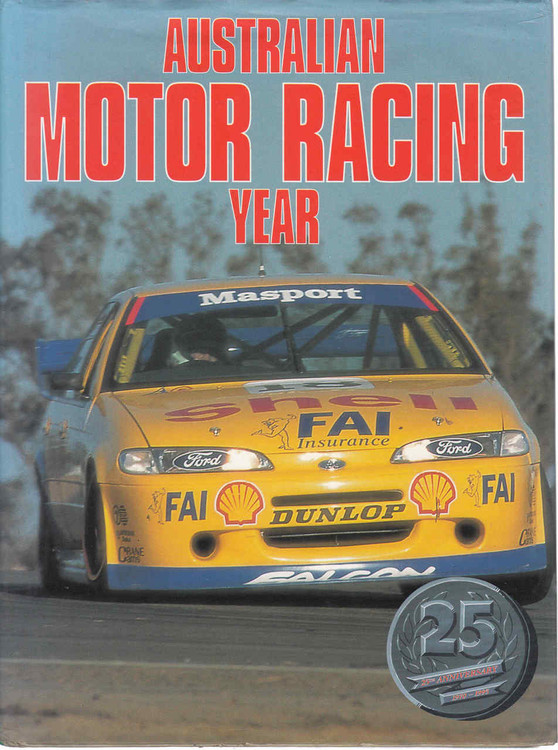 Despite having tried to ready ourselves for this year's 25th anniversary edition of Australian Motor Racing Year, mentally trying to convince out -elves that 25 years isn't really a quarter of a century (but it 4-an entire generation), we failed dismally. When the time came, those who had been there at the start just shook their collective heads and muttered things like, "Hasn't the time flown: or they started to get onto thaw hoary old chestnuts "Remember when AJ...."

What we can't deny, even to those who have joined us since (like Normoyle... "Do you guys know! was only 10 when you published the first Competition Yearbook?" Our art manager was much younger, but that's all we're allowed to say about those sorts of things), is that one way or another it's been a real blast.

We nearly blew it when we held back edition 24 from the "new" schedules (that of making the book available to avid enthusiasts and gift-buying relatives before Christmas in the same year as the events it covers) we had constructed for ourselves, and our readers in deference to the (then) new Asia-Pacific 2-litre series.

The cover and flaps went away months and months before the book finally got finished and, when it published, the flap information proclaimed a February 1995 release when, in fact, it finally published at the end of August, 1995.

So, we're back on track with Motor Racing Year 25 and, if any really late major events aren't included, you'll find them in next year's book.

Many people contribute to the words and pictures of this book from both Australia and overseas. And, like its companion annual publication, The Great Race, it takes more than just great words and pictures to make a great book. It also takes feeling.

And feeling is certainly what the supporting businesses have for our books. Time and again our company's reputation has been saved by our interested and enthusiastic staff in editorial, design and production areas, and in the filming and printing companies who simply have pride in their work and who want to do the best job possible.

We at Chevron are proud that we can produce our books in Australia. And our own people, and those at Griffin Press in South Australia, should take a bow as we truly applaud their efforts to meet short and often complicated deadlines.

We're looking forward to doing it all again for you, with them, next year and thereafter.