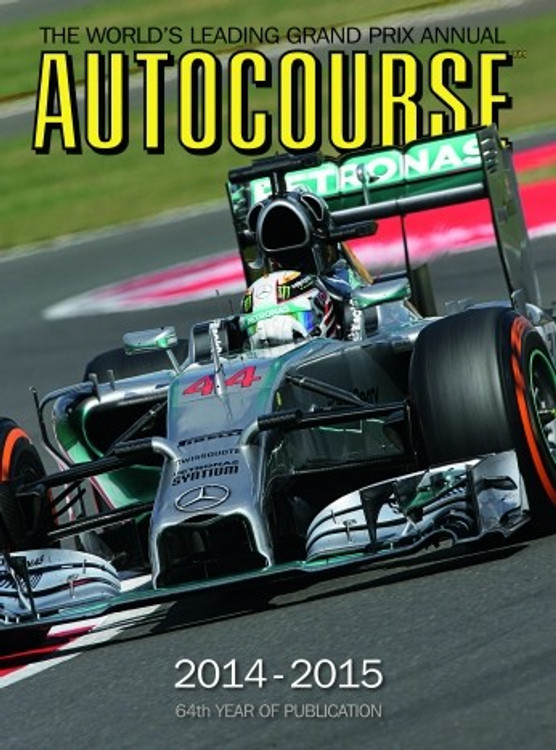 The world famous motorsport annual is regarded as the definitive account of the Formula 1 season. Edited by leading F1 journalist Tony Dodgins, plus Formula One coverage from Maurice Hamilton and Mark Hughes as Technical Editor, it has been long established as a genuine collector's item. Autocourse has an unrivaled heritage which is recognised by the entire motorsport community - and numbers F1 luminaries Jackie Stewart, Murray Walker and Ron Dennis as devotees.

This sumptuous book has detailed race-by-race reports, vibrant features, comprehensive statistics, technical illustrations and the best photography in the sport, Since 1951 it has, quite simply, been the must-have publication for all serious Formula 1 fans and this year once again it will undoubtedly be the definitive record of an enthralling Formula One Grand Prix season.

KEY POINTS: Possesses a prestigious 64-year history with an instantly recognisable brand name. It's the book of choice for all Formula One teams, with drivers, managers, owners and staff. Unparalleled race-by-race coverage of the Formula 1 season, written by some of the most respected names in F1 journalism, and edited by highly respected F1 stalwart, Tony Dodgins. Infamous drivers' Top Ten, which ranks the best drivers in terms of the overall achievement throughout the season.

Detailed results section, incorporating lap charts, time sheets, practice and qualifying data, and chassis log books. Comprehensive team-by-team reviews, with car specifications and driver biographies. Chapters on the GP2, Sports Cars, Formula Three, Touring Cars, the US racing scene and the exciting world of karting where many of the world's top race drivers begin their racing careers. This impressive mix of content complement an already impressive tome of information. Stunning photography from the world's leading motorsport photographers make Autocourse a must have record of the Formula One and motor racing season. Always widely and well reviewed in the national and specialist press.

MSRP:
Now: $149.95
Was:
In a season of shifting fortunes, Sebastian Vettel scored enough points with a sixth place in the final race to hold off Fernando Alonso and become the youngest F1 champion to win three titles in a...