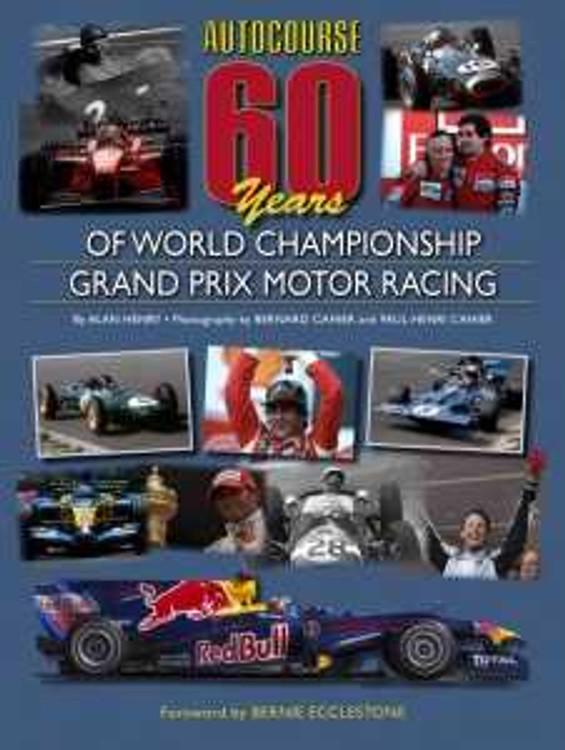 2010 marks the 60th Anniversary of the World Championship for Drivers, and Autocourse is marking the occasion with the ultimate record of the past six decades of Grand Prix Racing.Written by Alan Henry, the internationally respected motor racing correspondent who has covered the sport for more than four decades and has been the editor of Autocourse since 1988. He has attended more than 500 World Championship races and is one of the few journalists to have the inside line with some of the sport's most powerful figures, including powerbrokers Bernie Ecclestone, Max Mosley, Ron Dennis and Frank Williams. His first hand knowledge and unique perspective combine to bring an unrivalled authority to this magnificent history.

The book is beautifully illustrated with magnificent photography from the Cahier Archive, it contains hundreds of stunning images, many never published before as they have been researched specifically for this title.Bernard Cahier was an outstanding photo-journalist who was also a friend and confidant of many of the drivers for more than three decades. His evocative images bring back to life Grand Prix racing from an era now long lost. His son Paul-Henri, is one of a handful of photographers to have lifted motorsport photography into an art form, and the quality and eye for the unusual are presented here in glorious colour.

The book - Autocourse 60 Years of Grand Prix Motor Racing tells the story of the globally successful FIA Formula 1 World Championship from its roots before the Second World War to the present day. Early chapters cover the growth of motor sport from the first recorded race in 1894, and its adoption by Germany as a propaganda tool before the Second World War. When hostilities ceased, Alfa Romeo emerged as the dominant force and the tradition of Italian success was maintained by Maserati and Ferrari in the early fifties until challenged by the might of Mercedes-Benz.With the arrival of the 2.5 litre formula in 1954 came the emergence of the British challengers in the form of Vanwall, Cooper, BRM and Lotus. The 1.5 litre formula then saw these teams lead the world in the development of innovative chassis technology.

The advent of the ground-breaking Cosworth DFV engine and sponsorship in the late 1960's changed the face of the FIA World Championship completely, encouraging a new level of competition from the innovative March, Tyrrell, Brabham and McLaren teams.Ferrari fought back briefly in the late 1970's, only to be overtaken by the development of 'ground effect'. The 1980's were characterised by the turbocharger, and the dominance of the TAG and Honda engines with McLaren and Williams respectively.

The 1990's saw the rise of teams such as Benetton, Jordan, Stewart Grand Prix and BAR, all of whom eventually passed into the hands of new owners in the new century as leading car manufacturers spent untold millions buying into the sport.Despite the credit crunch and the worldwide recession Formula 1 has still managed to retain its position as a powerful global sport as the calendar heads towards a twenty race season.With more and more countries vying with each other to gain the right to stage a Formula 1 race, AUTOCOURSE 60 YEARS OF WORLD CHAMPIONSHIP GRAND PRIX MOTOR RACING also looks forward to the seventh decade as new teams arrive to take on the established giants.

Autocourse Grand Prix Who's Who (4th Edition in Slipcase)

MSRP:
Now: $149.95
Was:
Published in December. Hardbound, ISBN : 9781910584262 The world famous motorsport annual is regarded as the definitive account of the Formula 1 season. Edited by leading F1 journalist Tony...

MSRP:
Now: $149.95
Was:
In a season of shifting fortunes, Sebastian Vettel scored enough points with a sixth place in the final race to hold off Fernando Alonso and become the youngest F1 champion to win three titles in a...