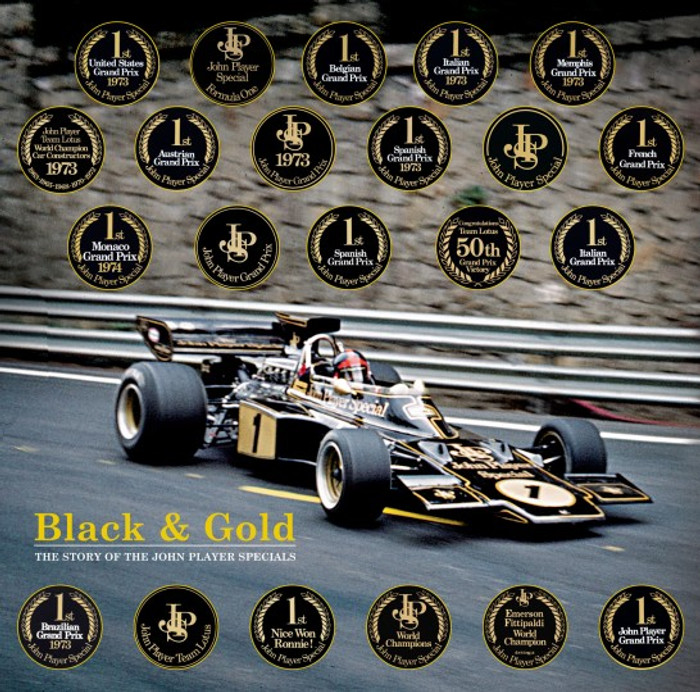 Back in the late 1960s, the commercial pace of motor racing was increasing. More major sponsors appeared on the F1 scene including tobacco giant Marlboro and Yardley cosmetics, and this interest had developed into a veritable flood by the time Team Lotus changed its Gold Leaf livery to the black and gold of the John Player Special cigarette brand. At the time, Johnny Tipler was working for the Stanbury Foley Organisation, a motor racing promotions hothouse based in Stratford, East London. Its major client was John Player & Son, and the livery of the Lotus 72 in its JPS guise was designed largely by SFO partner Barry Foley. In 1972 the black-and-gold livery also extended to the Team Lotus racing car transporters and JPS hospitality vehicles.

This book, Black & Gold, has been a gleam in publisher William Taylor’s eye for a long time. Probably eight years have elapsed since he and Johnny Tipler first talked about producing it. During that time Tipler spoke with the key figures from the JPS era – those who are still with us at any rate – while Taylor accumulated images of the period as well as amassing examples of John Player Special paraphernalia.

The SFO agency designed and produced all the John Player Team Lotus racing apparel in its sweat shops at Stratford and Maryland in London’s East End, as well as the T-shirts, stickers, anoraks and JPS merchandise that were sold to race fans at circuits. Working alongside Grand Prix statistician Mike Doodson and with reference to John Player marketing chief George Hadfield and his Special Events aide Ian Catt, Tipler’s role was to co-produce glossy JPS press handouts, which transcended in quality anything that had been seen before in motor racing PR. Race by race, they logged the fluctuating fortunes of drivers Emerson Fittipaldi, Dave Walker, Mario Andretti, Ronnie Peterson and Jacky Ickx, lurking in and around the pits and the Travco team support vehicle to catch nuggets of information that could be broadcast throughout the season.

Black & Gold The Story of the John Player Specials, is the result of a veritable wealth of knowledge and experiences from all the ‘players’ in a ‘special’ story that started in the 70s and is still recognised and remembered the world over. The Black & Gold legacy endures in CTL through Clive Chapman and former Team Lotus stalwart mechanics fettling and running JPS F1 cars from those halcyon days at historic events across the world.

MSRP:
Now: $129.95
Was:
It's part of Italian folklore how Ducati switched from electronics to motorcycle manufacturing after their Bologna factory was bombed during the Second World War and, after inventing a clip-on engine...

Go Like Hell - Ford, Ferrari, and Their Battle for Speed and Glory at Le Mans (A. J. Bime)