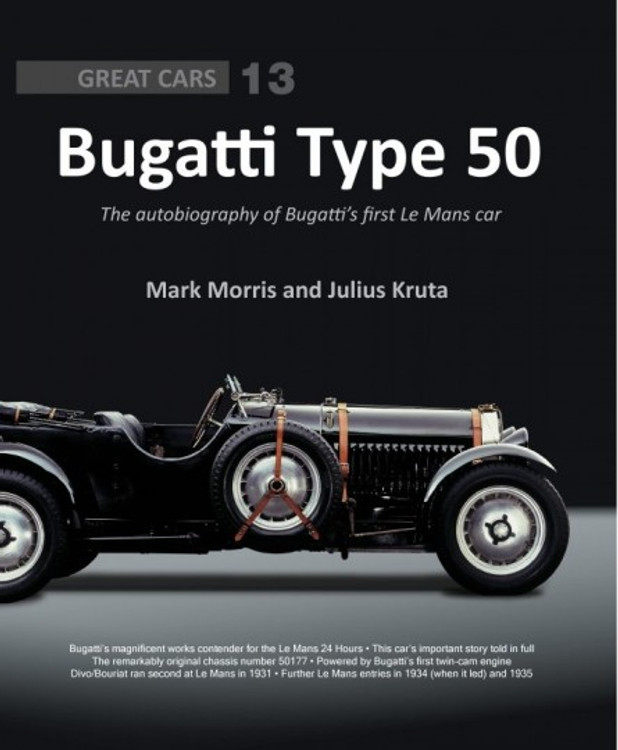 Introduced in 1930, the Bugatti Type 50 heralded a new era with the introduction of the Molsheim marque’s first twin-cam engine, a supercharged 4.9-litre straight eight of prodigious power. At a time when brute force was needed to win the Le Mans 24 Hours, a competition version was developed and three such Type 50s took part in 1931. The car around which this book is focused, 50177, was leading the famous endurance race when the team withdrew it owing to tyre failures that had afflicted the sister cars, causing one to crash heavily at high speed. The fascinating story of 50177, and the Type 50 in general, is told in this brilliantly researched and superbly illustrated new book in the publisher’s acclaimed ‘Great Cars’ series.

Julius Kruta is a freelance historian and automotive adviser. He became infected with the Bugatti virus at Prescott in England in the early 1980s and in 1994 he started a company specialising in hand-built Bugatti models. After graduating in 2000 with a thesis about Bugatti, he began his career at Bugatti Automobiles S.A.S in marketing and in 2003 became ‘Head of Tradition’, a position he held until summer 2018. He is the author or co-author of five books on the marque and has been a regular concours d’elegance judge at Pebble Beach in America and the most important events in Europe. He lives with his wife and two children in Baden-Württemberg, Germany.

Mark Morris works as an independent Bugatti researcher and consultant and he is Honorary Registrar of the Bugatti Owners’ Club. His Bugatti enthusiasm was kindled by a family friend who competed pre-war with Grand Prix examples of the marque, Types 37 and 35C, and his knowledge of motoring literature was nurtured by the late Peter Richley, who amassed an unrivalled motoring library. He lives with his wife and two children in the Midlands, UK.