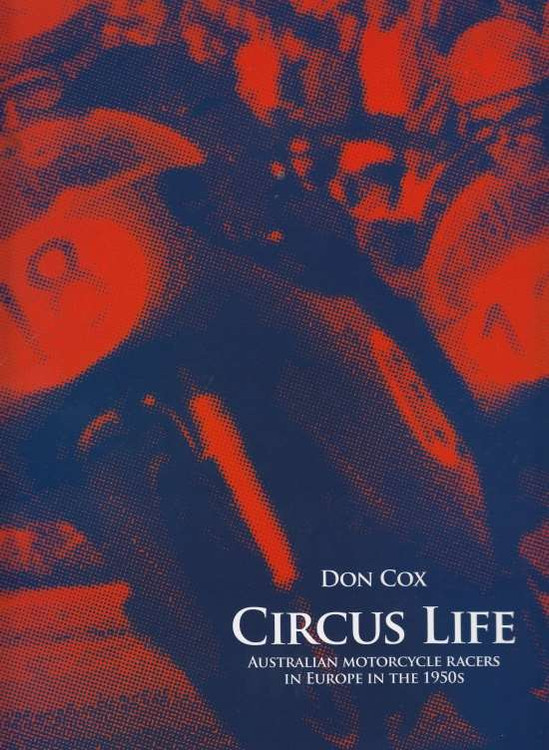 Signed by the author.

Foreword by Australia’s 1969 world 250 champion Kel Carruthers Hard-cover 480-page book with more than 300 photographs, the majority previously unpublished Background on 40 Australians who raced in Europe from 1948 to 1960

Which sport saw the first Australians compete behind the Iron Curtain? In the 1950s which profession allowed a welder from Prahran and a toolmaker from Belfield to earn 15 times their regular weekly wage?

Welcome to the gypsy world of the Continental Circus private entrants – warts and all – with the joys, camaraderie, heartache, laughs and low acts. It was a time when rider usually had to be truck driver, mechanic, cook and start-money negotiator as well. And management help? You wish! In the 1950s, it was considered un-Australian to push your own barrow.

Travel with the young men criss-crossing a still rebuilding Europe, racing for a living – some on the road with their mates, others with their new brides. Drift a Manx Norton flat out with Bob Brown at Spa-Francorchamps. Learn the Isle of Man Mountain section with Maurie Quincey. Take on race organisers over starting money with Jack Ahearn and Keith Campbell. Cure an electrical problem with your teeth and mend a broken gear linkage with fencing wire. Cross the mine fields into East Germany, where one wrong move could put you in a gulag. Experience the highs, lows and scary hospitals – stories even the men who lived them reckon people would not believe.

The product of eight years’ research and writing, Circus Life goes far deeper than the typical ‘who won what and when’. It puts you on the grid at long forgotten public-road circuits like St Wendel and Hedemora; in the van trundling across Europe in high summer and behind the Iron Curtain on the oil-stained roads of Brno.

MSRP:
Now: $129.95
Was:
By: Mike Seate . Celebrates those early machines seen most noticeably outside the Ace Café in north London and still associated with an era and a way of life which went beyond mere machines...

MSRP:
Now: $250.00
Was:
60th Edition of the leading motoring annual from innovative publisher ETAI. As in previous editions, Automobile Year 60 will be divided into three main subject areas: Industry, Motorsport and Culture...

MSRP:
Now: $79.95
Was:
This is the limited print-run of the original 1997 publication. It is a little known fact that the tiny Australian company, Elfin, was the world’s second largest producer/manufacturer of racing...

MSRP:
Now: $295.00
Was:
LAST COPY !!! By: Rod Davies, Lloyd Davies . Signed by Rod Davies. Today, Volkswagen's history regarding Australia has been all but forgotten. VWA having ceased local assembly in 1976 after producing...