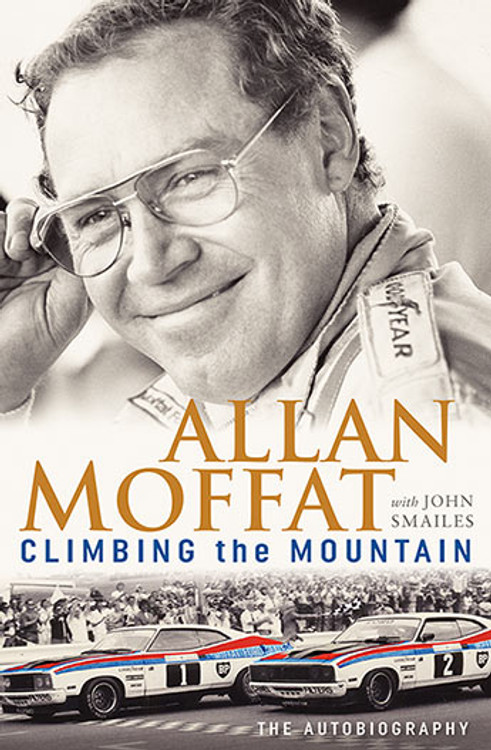 Told for the first time in his own words, this is the gripping inside story of Allan Moffat, an Australian motor sport legend.

Allan Moffat is one of the legends of Australian motor sport. His extraordinary driving career, which lasted from the mid-1960s to the late 1980s, coincided with the heyday of touring car racing. His achievements included 32 Australian Touring Car wins, four of them at Bathurst, and four Championships. His Trans Am Mustang, surely the definitive racing touring car of all time, claimed more than 100 victories. But Moffat's impact went well beyond the winner's podium. He brought a new level of business professionalism to motor racing, pioneering the use of sponsorship in a way that would change the sport forever.
Moffat, intense, reserved and driven, has been known as a man of few words. For years motor-sport fans have wanted to hear his story, and now Allan is telling it for the first time. His book is the compelling account of a young Canadian who moved to Australia with his family as a boy and became one of our greatest racing drivers. It's a tale of the epic rivalry with Peter Brock, which surprisingly culminated in a driving partnership and huge mutual respect, and it's about nostalgia for the glory days of motor sport in this country, when the concept of Holden versus Ford really did divide the nation, and when Mount Panorama was the true Mecca for hundreds of thousands, if not millions, of Australians.
Filled with intense rivalries, huge egos, on-course stories and incidents, and all against the backdrop of our motor sport history over more than forty years, this is THE book for all fans of Australian motor racing.

Born in Saskatoon, Saskatchewan, Canada, Allan Moffat won the Australian Touring Car Championship four times, the Sandown 500 six times and the Bathurst 500/1000 four times. He is one of only two drivers to have won The Great Race at Bathurst in both formats-500 miles and 1000 kilometres. He was inducted into the V8 Supercars Hall of Fame in 1999, and became an Australian citizen in 2004. After he retired from racing he became an expert commentator on motor-sport telecasts for Channel Seven, Channel 9 and the ABC.

John Smailes is a journalist, motor-sport commentator, publicist and, until recently, the proprietor of a specialised communications agency. He was co-commentator with Will Hagon on the ABC's national coverage of the Australian Touring Car Championship at the combative height of the Ford versus Holden wars. He is the author of a history of the Confederation of Australian Motor Sport.

Race Across The World - 1968 London to Sydney Marathon (John Smailes)

Moffat At The Mountain A Photographic History (Soft Cover Book)

MSRP:
Now: $59.95
Was:
By: Clymer . Every Clymer manual contains hundreds of original photographs and illustrations developed from a complete disassembly and assembly of the motorcycle. This, in addition to extensive...

MSRP:
Now: $89.95
Was:
By: Walter Hassan, Graham Robson . - Authorised Mercian Reprint of the classic original ! Climax in Coventry - My Life of Fine Engines and Fast Cars - this book is an autobiography written by Walter...

Classic Images - Feet Up In The Fifties