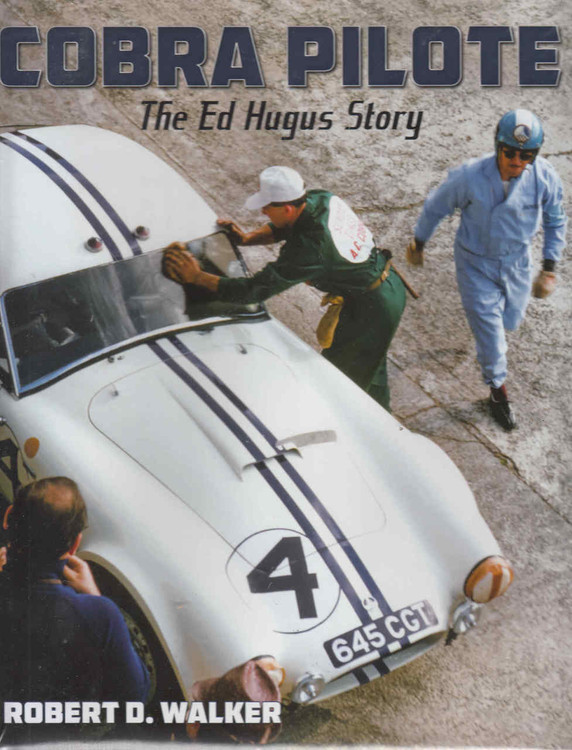 This book primarily takes a close look at the Hugus-Shelby Cobra connection. In the early 1960s James Edward (Ed) Hugus personally financed the first seven production Cobras built since Carroll Shelby did not have the money or facilities for the project. Hugus ordered the first modified but unfinished Aces from the A.C. Cars factory in England, and had his service department mechanics at European Cars in Pittsburgh, Pennsylvania install the Ford 260 engines and Galaxie transmissions, completing the cars for sale. Once Ford signed a contract for Shelby American Cobra production in Venice, California, Hugus still completed Cobras for distribution and sales to all points east of the Mississippi River.

Carroll Shelby may have had the Cobra dream but it was Hugus who stepped forward and made Shelby's venture a reality.

Born in Oklahoma City, Oklahoma on May 18, 1944, Robert Daniel Walker grew up in Hayward, California and received a BA degree in Public Relations from San Jose State College in 1965 and a Masters in Industrial Arts from Chico State College in 1967. He then taught on the Secondary and Junior College level for 20 years in the areas of Vocational Education and Journalism. He subsequently owned and operated a successful retail furniture business for over ten years and retired to Pebble Beach, California in 1998.

He has been interested in sports cars from a very early age and in 1962 bought a 1960 Bugeye Sprite. His enthusiasm was cemented when he bought a Ferrari and then took a driving class at Russell Racing School at Laguna Seca in 1993. The next year, his wife bought him a 1963 Elva Courier for a Christmas present and he began vintage racing. Daniel has also restored a 1958 Elva Courier and raced both cars in club events and the Monterey Historics, as a member the Historic Motor Sports Association and with Steve Earl’s General Racing. He continues to restore sports cars and fabricate race car parts for vintage racing applications.

In 2004 he met Ed Hugus through vintage racing and restoration work on his 1963 Cobra.

MSRP:
Now: $49.99
Was:
By: Tom Cotter . The car in the barn is the Holy Grail of the automotive world. The quest revolves around finding a dust-covered beauty—a long- forgotten Grand Sport Corvette, Jaguar E-Type, or...

MSRP:
Now: $24.50
Was:
By: Lain Ayre . Description STOP! Don't buy a Cobra replica without buying this book FIRST! Having this book in your pocket is just like having a real marque expert by your side. Benefit from...

MSRP:
Now: $299.95
Was:
By: Trevor Legate . 2nd hand book in very good condition Description This book tells the complex saga of a sports car that was created in the early 1960s as a result of an unlikely collaboration...

MSRP:
Now: $59.95
Was:
By: Clymer . Every Clymer manual contains hundreds of original photographs and illustrations developed from a complete disassembly and assembly of the motorcycle. This, in addition to extensive...