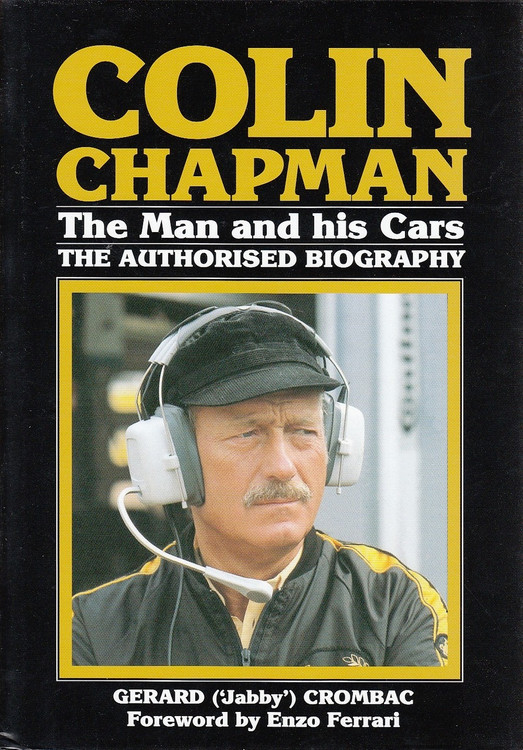 Colin Chapman's contribution to postwar motorsport was immeasurable. In the 1960s and 1970s his Lotus Grand Prix cars were world-famous, winning 13 World Championships — seven constructors' titles and six drivers' titles. This absorbing book is the definitive biography of the man Enzo Ferrari described in his foreword as 'so talented because of his ability to produce ideas ahead of his time'.

Chapman was an all-round achiever. Besides his engineering skills, he was a superb driver, pilot and marksman, and an experienced yachtsman. Yet it is for his cars that he is best remembered. The original Lotus Elites, Elans and Europas set exceptional standards of performance and, after the company went public in the late 1960s, Chapman took the marque still more up-market with the new Elite, the Eclat and the mid-engined Esprit.

Chapman's sudden death in December 1982 stunned the motoring and motorsport worlds. He was an institution. His energy was legendary, his sometimes zany exploits and humour both delightful and infuriating. This book, illustrated with many photographs from the Chapman family and other private collections, tells his full story. It had the blessing of both his widow Hazel and the Lotus company, and received fulsome acclaim when first published in 1986.

Gerard ('Jabby') Crombac was a close friend of Colin Chapman, having bought one of the earliest MkVI Lotus sports cars in 1953. A revered Formula 1 journalist, he was active in the sport from 1950 —when he started reporting for Autosport —until 2003, when he eventually retired. He died in 2005.

Colin Chapman - The Man and His Cars - The Authorised Biography (1986, 1st Ed, Hardcover)

MSRP:
Now: $64.95
Was:
By: Jeremy Walton, Gregor Marshall . Description Gerry Marshall's motorsport career spanned over 40 years, and during this time he became a legend both on and off the track Here for the first...

MSRP:
Now: $59.95
Was:
A book by Mike Lawrence. Colin Chapman was the most charismatic and brilliant engineer in the history of motor racing. His innovative designs revolutionized the layout of the grand prix car. He...

MSRP:
Now: $69.95
Was:
By: Rob Simmonds . Record breaking is the best way to describe Colin Edwards's amazing fight back to win the 2002 World Superbike crown. The straight-talking Texan clawed his way back from a 58 point...

MSRP:
Now: $24.50
Was:
By: Lain Ayre . Description STOP! Don't buy a Cobra replica without buying this book FIRST! Having this book in your pocket is just like having a real marque expert by your side. Benefit from...