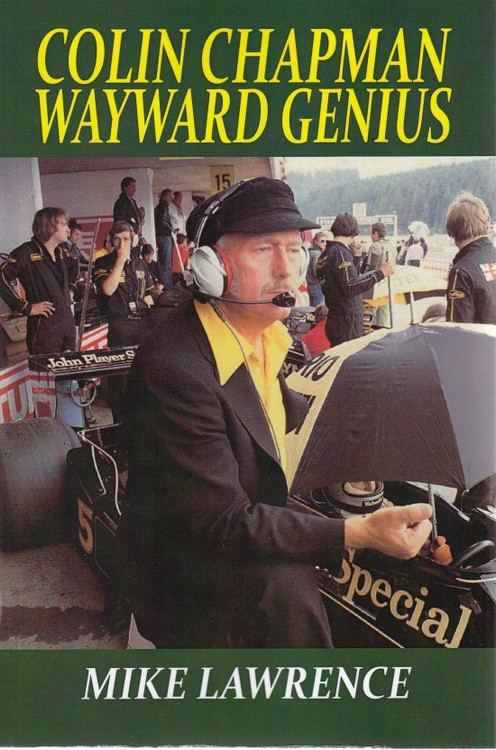 A book by Mike Lawrence.

Colin Chapman was the most charismatic and brilliant engineer in the history of motor racing. His innovative designs revolutionized the layout of the grand prix car. He played a key role in the establishment of the British motor racing industry which now leads the world. Through his Lotus company he not only dominated Formula 1 racing but also made an extraordinary contribution to the development of the sportscar with the Elite and the Elan. Mike Lawrence's biography of this remarkable man recalls his achievements, but it also delves into the dark side of his genius. Chapman's triumphs in the 1960s and 1970s have never been equalled world championships in Formula 1, a succession of grand prix victories and triumph at the Indianapolis 500. He also formed famous partnerships with exceptional drivers like Graham Hill, Jim Clark, Jochen Rindt, Emerson Fittipaldi, Ronnie Peterson, Nigel Mansell and Mario Andretti. The Lotus single seaters that brought them such success, the 25, the 49, the 72 and the 79 are now regarded as milestones in the evolution of the racing car. Yet Chapman's abrasive character, drive for success and unorthodox business methods clouded his reputation. Mike Lawrence looks in detail at this aspect of Chapman's history and gives a revealing account of the tangled financial arrangements that kept Chapman, and Lotus, afloat. He shows, too, how Chapman operated in a fast moving, highly pressurized world of international racing and car making that generated huge rewards and temptations. The crunch came when he became involved with John Z. Delorean, the American entrepreneur who found the ill-fated Delorean car company.

MSRP:
Now: $79.95
Was:
A comprehensive guide to the desigh, development, restorationa and maintenance of the Lotus - Ford twin-cam engine. - REPRINTED by Brooklands Books, UK 2012 - Reprint of the 1988 Niles Wilkins...

MSRP:
Now: $69.95
Was:
By: Rob Simmonds . Record breaking is the best way to describe Colin Edwards's amazing fight back to win the 2002 World Superbike crown. The straight-talking Texan clawed his way back from a 58...

MSRP:
Now: $49.99
Was:
By: Popular Mechanics . Is your rear window defroster not working? Does your fuel pump need replacing? Whatever job you need to do on your car—or discuss intelligently with a...