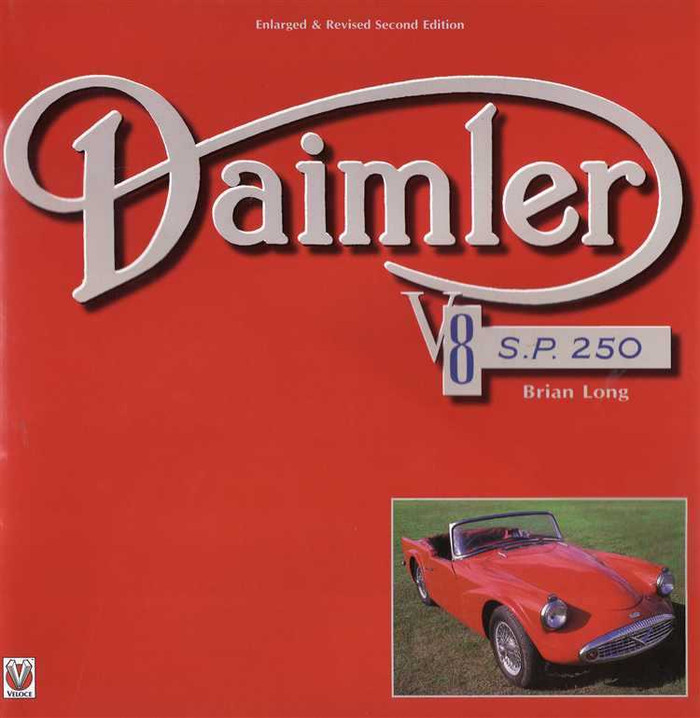 The fascinating story of Daimler’s daring glass fibre sports car, including its commercial feasibility at the time, and key role in Daimler’s future, its development, production, and the proposal that could have seen it built into the 1970s. A bold new design, the 'Dart', as it was originally to be called, should have been Daimler’s saviour and a springboard to a range of new models, including saloons and coupés. Sadly, Jaguar – a company with its own sports cars – bought Daimler before the car was allowed to evolve. Contains contemporary material and photography throughout to help owners seeking to restore their vehicles in period guise.

Today very much part of the classic car scene around the world, the Daimler SP250 sports car has a fascinating and eventful history. The idea of staid and traditional Daimler building an open sports car is surprising enough in itself: that the car should be fibreglass-bodied, V8 engined and have a daring futuristic appearance stretches credibility to the limit ... but that’s exactly what the company did produce between 1959 and 1964. A bold new design, the “Dart” as it was originally to be called, should have been struggling Daimler’s saviour and a springboard to a range of new models, including saloons and coupes. Things didn’t quite work out that way and Daimler was acquired by Jaguar, which led to the SP 250’s Edward Turner-designed V8 engine being used in a Daimler-badged version of the Jaguar Mkll saloon. Here is the full story of the SP 250 including concept, development and production history. Also covered are related models, specials, buying and restoration, chassis numbers, production numbers, colour schemes, clubs and specialists. Altogether a source book of essential information for SP 250 and Daimler enthusiasts.

MSRP:
Now: $89.95
Was:
By: Barrie Price . ** REVISED AND ENLARGED SECOND EDITION ** Fascinating and well ilustrated history of these big Bugattis. The Bugatti Type 46 was announced in the Autumn of 1929. A very large...

MSRP:
Now: $43.95
Was:
By: Lain R. Murray . Description When the Second World War broke out, aeronautical engineer Barnes Wallis asked himself what he could do to shorten the war. His answer was to develop a range of...

MSRP: $49.95
Now: $29.95
Was: $49.95
Description This is the official, action-packed review of the epic Dakar Rally in 2011. For the third year motorsport’s greatest adventure took place in South America, crossing more than...

MSRP: $199.95
Now: $149.95
Was:
By: Dennis Adler . From the earliest workshop days to the grandest marque in the automotive world, the story of one of the most important enterprises of the twentieth century comes alive in this...