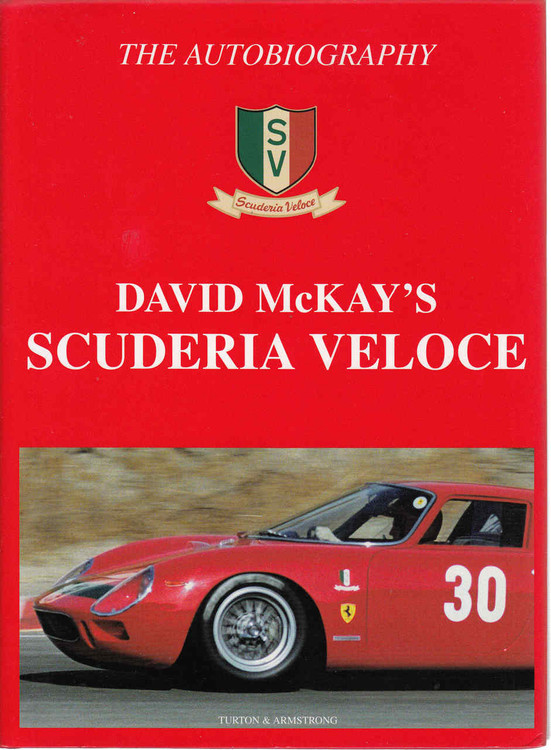 David McKay has a unique place in the post-WW2 history of motor sport in Australia. His is one of the most widely known names in motor racing, yet his role in •shaping the sport in post-war Australia is still largely unrecognised.

In this book he writes very much as the 'expert observer', having not only been a motoring writer for magazines and daily newspapers, but also a trials driver and navigator, winner of two major Australian racing championships, holder of an Australian land speed record and founder of Australia's first professional motor racing team.

And those red Ferraris: the much loved 'old red lady' LM250, the P4 and two factory-owned Dinos.

From sheer necessity David McKay pioneered sponsorship in Australian motor racing. Ampol backed his Aston Martins and his first Jaguar; Victa backed his first Cooper; Castrol (and Jack Bryson) backed the second Jaguar while the names Scuderia Veloce and Shell are joined in memory to this day. His involvement in bringing General Motors-Holden to motor racing is a story in itself.

Now living quietly in the Southern Highlands of New South Wales with his French wife, Annie, David McKay has, in this autobiography, revealed what lay behind his successful motoring ventures and the reader will gain some insight into the tremendous effort involved and perhaps understand why the name McKay still opens doors at the very top of some of the world's major motor companies and organisations.

MSRP:
Now: $49.95
Was:
A book signed by the author Geoff Smedley, paperback, 198 pages, published in 2018 Geoff Smedley was bom into a Tasmanian family accustomed to building their own pleasures, from fine art to houses to...

David Vizard's How To Build Horsepower

MSRP:
Now: $59.95
Was:
By: David Vizard . Description Proven methods for increasing horsepower in any engine.  Extracting maximum torque and horsepower from an engine is art as well as science. This all-new...

David Vizard's How to Super Tune and Modify Holley Carburetors

MSRP:
Now: $69.95
Was:
By: Peter J Tuthill . From August Bank Holiday 1952 to Whit Monday 1955 Davidstow race circuit in North Cornwall provided the thrills of Motor Racing for the first time ever in the West Country. In...