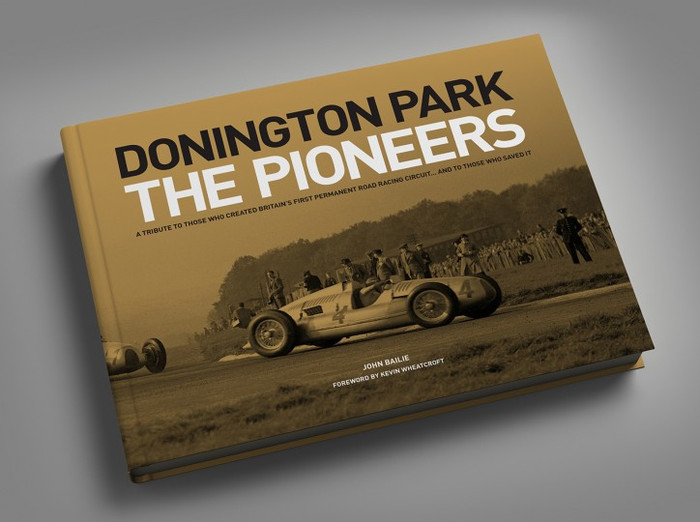 This isn’t a book just about motor racing. It's about people. It’s about the pioneers who created Britain's first permanent true road racing circuit...firstly for motor cycles in 1931 and then also for cars from 1933.

It’s about the phenomenal success and dramatic progress that saw the circuit expand from loose-surfaced tracks created for horse-drawn carriages to hosting four pre-war Grands Prix, the first in 1935, the final two the "Silver Arrows" Grands Prix of 1937 and 1938. It's about how the Army took over during the war years and the many attempts that came very close to bringing racing back in the 1960s with innovative, state-of-the-art facilities...and it describes the Tom Wheatcroft era from 1977, son Kevin’s revival of the track in 2010 and the New Vision of MSV's first full season in 2018.

Researched, written and designed by John Bailie, the book includes many new photographs plus documents, maps and diagrams, unique then-and-now images, illustrations by the author, personal anecdotes and memories, together with extracts from on-the-spot race reports by Bill Boddy MBE, founding editor of Motor Sport magazine.

Mercedes In Motorsport - Pioneers To Perfection

MSRP:
Now: $150.00
Was:
By: Alan Henry . Mercedes - Benz is a name which stirs evocative images of more than century of motorsport achievement, from the pioneering days of racing when every event was a dangerous adventure...

MSRP:
Now: $55.00
Was:
By: Larry O' Toole . Take a pictorial cruise back through Australia's early hot rod days from the photo albums of rodders who were part of the scene. Chapters follow Early Hot Rods on the Street,...

MSRP:
Now: $19.95
Was:
Author: Rod Ward, Published in 2018, paperback, 31 pages   In the opinion of William Boddy, revered editor of Motor Sport, ‘the Hotchkiss company was one of those manufacturers...

MSRP:
Now: $29.95
Was:
By Chris Rooke  Features • What to look for when buying a Triumph Trident or BSA Rocket III • Differences between models explained • Written by an experienced Triple...

Donald Campbell 330+ A Speed Odyssey - His Life With Bluebird