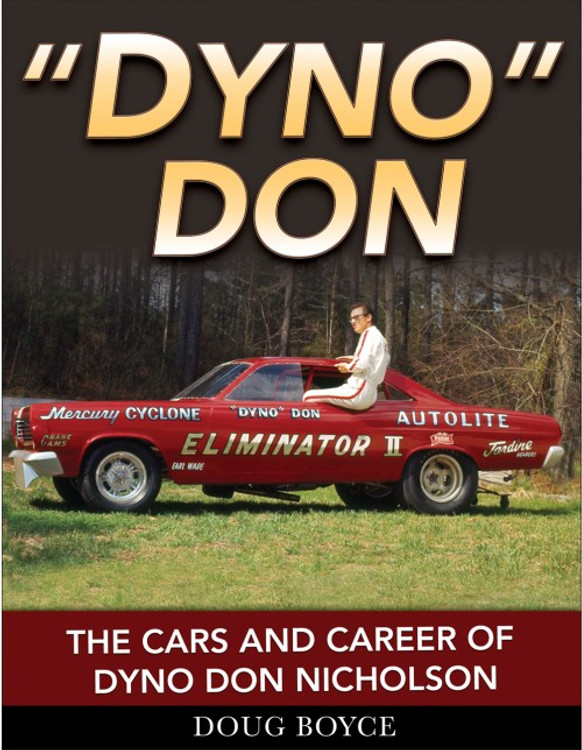 If you are a fan of a certain era of racing, a Ford fan, or certainly a Dyno Don fan, this book will be a welcome addition to your library. Follow his Hall of Fame career on the match race circuit.

Many fans of drag racing consider the most interesting era to be from the 1950s through the 1970s, the years when the sport really took off. During that period, so much changed from a speed and technology standpoint that people often refer to this time as the golden age of drag racing.

Drivers often became associated with a particular manufacturer, such as Chevy, Ford, or Chrysler through sponsorship, factory team rides, or sometimes simply their own preference. The more successful drivers became household names in the drag racing community. Chevy had Grumpy Jenkins, Pontiac had Arnie “the Farmer” Beswick, Mopar had Sox & Martin and Dandy Dick Landy, and Ford’s most successful driver of the era was the legendary “Dyno Don” Nicholson.

Nicholson’s first wins on a national level were actually in the early 1960s in Chevrolet products. He became extremely successful on the match-race circuit. Then, in 1964, he switched over to Mercury with the new Comet after General Motors enacted a factory ban on racing activities. He won 90 percent of his match races that year. He stuck with Ford and Mercury products and won throughout the 1960s and 1970s, even after Ford also pulled the plug on factory team sponsorship. He made it to the final rounds in nearly 50 national events during that period, in addition to winning championships, awards, and match races along the way. If you are a fan of a certain era of racing, a Ford fan, or certainly a “Dyno Don” fan, this book will be a welcome addition to your library

BMW - The Book Of The Car (Don Slater)

MSRP:
Now: $95.00
Was:
By: Harold Bettes and Bill Hancock, 2nd hand book, like new condition. Description Make The Most of Expensive Dyno time Learn how, when and why to use Dyno Get accurate, repeatable and...

MSRP:
Now: $67.50
Was:
This all-new book covers what was often the inspiration for all the crazy show rods, the model kits themselves. Viewed from a collector’s standpoint rather than a builder’s point of view,...

MSRP:
Now: $64.95
Was:
Road racing has long-storied roots in North America that reach from coast to coast and to Canada. Some of the greatest drivers to ever compete raced wickedly fast machines, staged epic duels on...

MSRP:
Now: $64.95
Was:
This will be your primary resource when it’s time to tackle a full restoration or complete a simple repair on your prized Pentastar. You won’t find a cheaper “part” that helps...

MSRP:
Now: $85.00
Was:
How to Supercharge and Turbocharge GM LS-Series Engines is the only book on the market specifically dedicated to forced air induction for LS-series engines. It provides exceptional guidance on the...

MSRP:
Now: $95.00
Was:
Few races have captured the imagination of racing fans as the 1992 Hooters 500 held at Atlanta Motor Speedway. On November 15, 1992, the entire NASCAR racing community tuned in to watch as six...

MSRP:
Now: $57.50
Was:
Immerse yourself in Jeep trivia with this compilation in CarTech's 1001 Facts series that celebrates all makes, models, shapes and sizes that made the Jeep brand popular over the last 75-plus years...

MSRP:
Now: $58.95
Was:
Author Mike Mavrigian guides you through each important stage of the Holley carb rebuilding process, so you have the best operating carburetor for a particular engine and application. In addition, he...