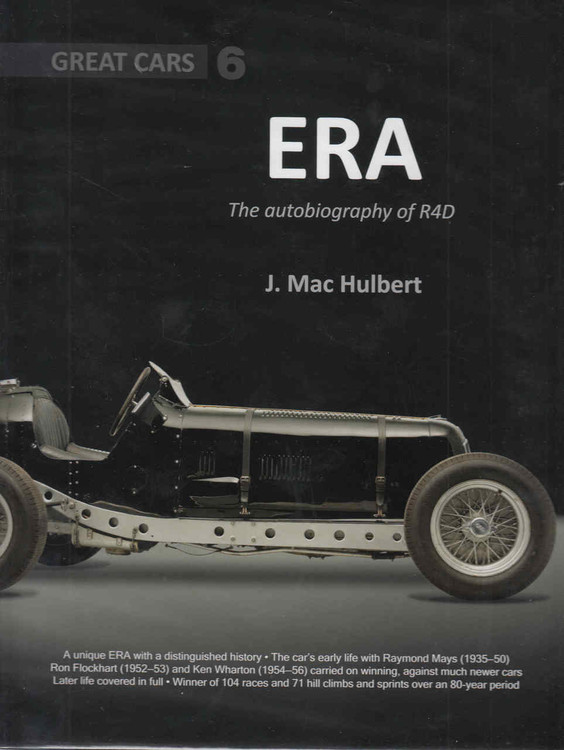 The famous cars made by ERA (English Racing Automobiles) epitomise British motor racing during the 1930s and have a very special place in the affections of patriotic enthusiasts. This magnificent book tells the story of a uniquely historic example that has competed almost without a break for 80 years and achieved innumerable successes. R4D was campaigned extensively before and after the Second World War by Raymond Mays, the leading light of the ERA company, before passing through a succession of subsequent owners who have kept this famous car at the forefront of competition to the present day. The extraordinary life of R4D, a formidably powerful and charismatic racing car, is told in fascinating detail in this long-awaited book.

Key points - Early phases of life as R4B and R4C during the period 1935–37, including epic adventures on the continent – in France, Germany and Switzerland – and also in South Africa. - Modified to become R4D, the car achieved even greater fame driven by Raymond Mays in hillclimbs and races, from record-breaking at its spiritual home, Shelsley Walsh, to racing in the British Grand Prix. - Post-Mays, more success came with Ron Flockhart (1952–53) and Ken Wharton (1954–56), R4D remaining incredibly competitive despite advancing years. - Mid-life: with a succession of dedicated owners who were enthralled by its history, R4D kept on competing from the late 1950s to the early 1970s, sometimes with spectacular success. - In Anthony Mayman’s fastidious hands (1984–93), R4D returned from a period of hibernation to dominate Britain’s burgeoning historic racing scene, taking win after win against more modern opposition. - After further changes of ownership, the author eventually acquired R4D in 2001 and, true to the car’s heritage, continued to compete with it extensively and successfully, also becoming its longest-serving custodian since its early life with Mays. Author Born in Somerset, J. Mac Hulbert is an academic who spent most of his career at Columbia University in Manhattan, where he was the R.C. Kopf Professor of International Marketing. His passion for historic cars has led him to own and compete with a huge variety of machinery, including ERA R4D in the period 2001–15. He has written many books about business, but this long-awaited and thoroughly researched work is his first about cars.

Erich Strenger and Porsche - A Graphical Report by Mats Kubiak

Escort Carriers and Aviation Support Ships of the US Navy

Enzo Ferrari - The Man, the Cars, the Races