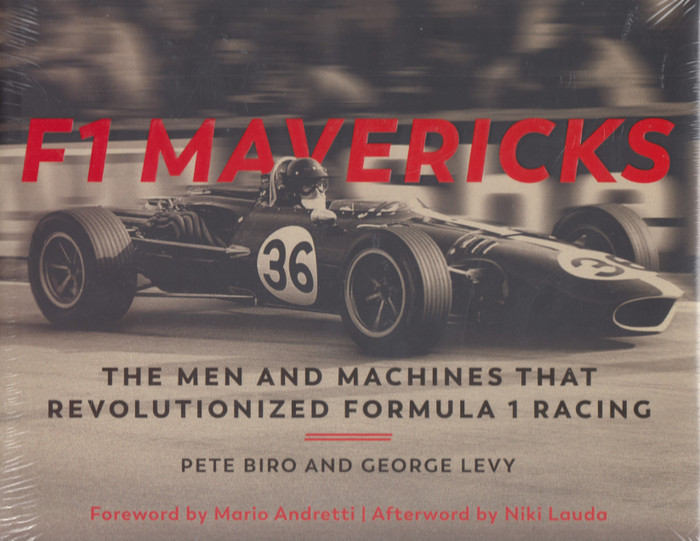 F1 Mavericks is the story of the grandest, most influential, and most fondly remembered era in Formula 1 racing as seen through the lens of master motorsports photographer, Pete Biro.

The period from 1960 to 1982 saw the greatest technological changes in the history of Formula 1 racing: the transition from front engines to rear engines, narrow-treaded tires, massive racing slicks, zero downforce, and neck-wrenching ground effects—and, of course, a staggering increase in performance and reduction in lap times. In short, the period saw the creation of the modern Formula 1 car.

This is also the time when legendary names who defined F1 were out in full force: Jim Clark, Jack Brabham, Dan Gurney, Sir Jackie Stewart, Graham Hill, Niki Lauda, James Hunt, Bruce McLaren, Jody Scheckter. We’ll see and meet all of them. But F1 Mavericks also focuses on the designers and engineers behind the cars—men like Colin Chapman, Sir Patrick Head, Maurice Philippe, Franco Rochhi, Gordon Murray, and many others. We’ll hear directly from many of them, including a foreword from 1978 F1 World Champion, Mario Andretti.

Strap yourself in for the story of the greatest era in Formula 1 racing—it's all here in F1 Mavericks.

The author
Photographer Pete Biro began shooting motorsports in the 1950s, contributing to magazines such as Road & Track and Car and Driver. As his career progressed, his work found greater fame on the pages of outlets such as Time, LIFE, and Sports Illustrated, eventually garnering high-profile clients like the Big Three US automakers and Goodyear Tire. He followed the Can-Am series throughout its 1966 to 1974 glory years, becoming good friends with its top drivers, team owners, and engineers.

Author George Levy is a longtime automotive journalist and marketer with a strong focus on motorsports. He is the former editor of Autoweek magazine and sits on the board of the Motorsports Hall of Fame of America. Levy is based in Detroit, Michigan.

Mario Andretti is auto racing's definition of "Been There, Won That." His professional driving career spanned more than four decades and includes pit-stops as a Formula One driver (1978), an Indy 500 winner (1969), the Daytona 500 (1967), and four CART/USAC open-wheel racing national championships. Andretti has been called Mr. Versatile, known for driving everything from USAC sprint cars on the dirt to IndyCars, sports racing prototypes, and of course F1. He was Newman Haas Racing's first driver when the team was formed in 1982, raced there for 12 seasons, and is considered one of Paul Newman's closest friends.