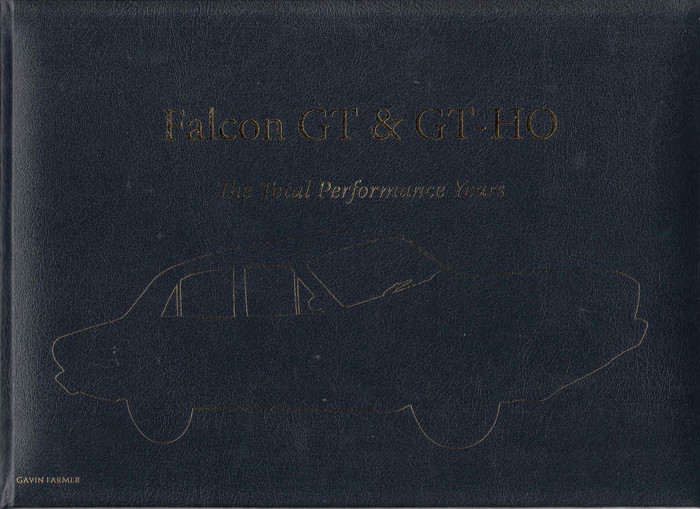 At last, a book that covers the full development and racing history of one of Australia’s most iconic and collectable cars – the Ford Falcon GT and GT-HO.

Author Gavin Farmer has spent years researching the subject covering the models from the XR through to the XB with an acknowledgement to the XC Cobra.

Available as a standard hardbound with dust jacket or padded leather limited edition (to 351 numbered and personally signed).

This book is a must for any motoring performance enthusiast’s library!

Ford could not have wished for a better start to the career of its new GT when it won the 1967 Hardie-Ferodo 500 race in the hands of Harry Firth and Fred Gibson. All of a sudden a legend had been created.
Following that win buyers flocked into Ford showrooms wanting their own Falcon GT. Here for the first time Australian motorists could buy a genuine high performance family sedan off the showroom floor. Ford brought sporting motoring to the everyday car buyer. No other manufacturer had done that until then.

Sales momentum continued from the XR through to the succeeding XT, XW and XY models that were part of the program. Each raised the bar just that little bit higher until the arrival of the first GT-HO in the XW body—this car raised the bar significantly and we were now embroiled in a power war. By that time the XY Phase III GT-HO boasted 300bhp and around 140+mph performance. When Ford released the stylish new XA range in 1972, a GT was part of the models on offer but there was no GT-HO. Five months after the sedans release came the much anticipated Hardtop that was also available as a GT and it was this model that formed the basis of Ford's continuing race program.

The legend that was the Ford Falcon GT effectively died with the XB Falcon. Those immortal letters did not grace a Ford again until 1992 when through Tickford Vehicle Engineering the company released a 25th Anniversary edition. But it was not the same, there was no emotion, no glory.

Ford confounded the critics by labelling their new high performance XR sedan as the Falcon GT. After all, everybody who knew anything about high performance cars, and GTs in particular, knew that a car carrying those immortal letter would always be a stylish two-door Italian coupe and definitely not a four-door sedan. But Bill Bourke, then the company's marketing director, was adamant—their high performance new model would be a sedan and it would be called the GT, no arguments!
For Australia in 1967 the Falcon GT was a stunning addition to the new XR Falcon range. Available in one colour only—GT Gold—with black stripes it focussed attention on the Ford brand and soon every XR Falcon that Ford could build was sold. It was a brave marketing move by Bill Bourke but it worked.

The beating of drums only increased with every new iteration of the Mustang-bred Falcon theme. The XT Falcon GT brought the 302 V8 and some refinements but it failed on the race tracks of Australia for some reason. However, it covered itself in glory by taking out the Teams Prize for Ford Australia in the 10,000 mile London-Sydney Marathon where Ian Vaughan finished third against the world's best rally drivers which was a fantastic achievement.

The XW and XY series followed with a GT sedan and each had a special version for those for whom performance was everything—the fabled GT-HO versions. Were they race cars for the street or street cars for the race track? The debate continues to this day. What was unequivocal about the Phase II and Phase III GT-HOs was their towering performance.

Following the XY came the sleeker-styled XA Falcon that also had a GT available to buyers. Five months after the sedan came the Hardtop, also available as a GT. But these two GTs were only special insofar as they carried the GT badges and were powered by the mighty 351-cid Cleveland V8 engine; there was no Phase IV as planned and that is another part of the folklore.

At the end of 1973 Ford announced it was no longer supporting the factory race team and by 1977 the Falcon GT as a model had been consigned to history. There were no wakes to cheer the GT or to acknowledge the huge contribution it had made to the Ford Motor Company of Australia or to the history of the car in general in this country.

Hopefully this book will go some of the way to exploring the Falcon GT and its history.

Gavin Farmer has had a lifetime involvement with motorcars one way or another. He bought his first car magazine—Modern Motor, September 1959—while in high school and this began a collection of magazines, books and model cars that occupy a special place in his life today.
Today he is one of Australia's leading motoring historians and has regularly contributed to such prestigious publications as Automobile Quarterly, Collectible Automobiles, The Automobile, Bimmer, Sports Car International and others. In addition he has written several books including Tickford: The Joy of Driving; Imprezive WRX: Subaru's Turbo Legend; Hey Charger: The Sensational Chrysler Valiant Charger; Leyland P76: Anything but Average; Great Ideas in Motion: A History of Chrysler in Australia 1946- 1981; BMW's Legendary Coupes; Morgan Aero 8; Dead Ends and Duffers and Aerodynamic Tatras.

From the 70s through to the 90s he worked in the automobile industry in various roles from manufacturing, sales—wholesale and retail—and public relations before turning his abilities to writing. His original professional training was for teaching but he was looking for wider challenges in life. To this end he has been a State Manager for a multi-media educational publishing company as well as State Manager for a company that marketed computerised dispensary systems—in fact he was a pioneer in this field.
All the while he was adding to his knowledge of automobiles, the industry and the many new technologies. A colleague once described him as a "barefoot engineer!"
A man who is passionate about the automobile and its history, Gavin lives with his wife on a small property in the beautiful Adelaide hills where he enjoys occasional drives in his newly restored and quite rare Subaru ff-1.

MSRP:
Now: $89.95
Was:
By: Ewan Kennedy . Acomprehensive guide for the Falcon enthusiast, whether they be an owner, buyer, or simply a lover of these classic models from Ford. A compilation of road tests, brochures,...

MSRP:
Now: $129.95
Was:
This book covers the sporting versions of Ford’s Escort Mk2, including the RS Mexico, Sport, Harrier, RS1800 and the RS2000. Also covered are the Australian variants and Series X cars...

MSRP:
Now: $99.99
Was:
Mercedes have been building fast cars since the earliest days of motoring. With many racing successes gained pre-1914, they went on in the 1920s to produce the fire-breathing S, SS, SSK and SSKL cars...

MSRP:
Now: $70.00
Was:
By: Anders Ditlev Clausager . The E-type was an astonishing car when launched in 1961: astonishing looks, astonishing performance and an astonishingly low price. Enthusiastic drivers all over the...