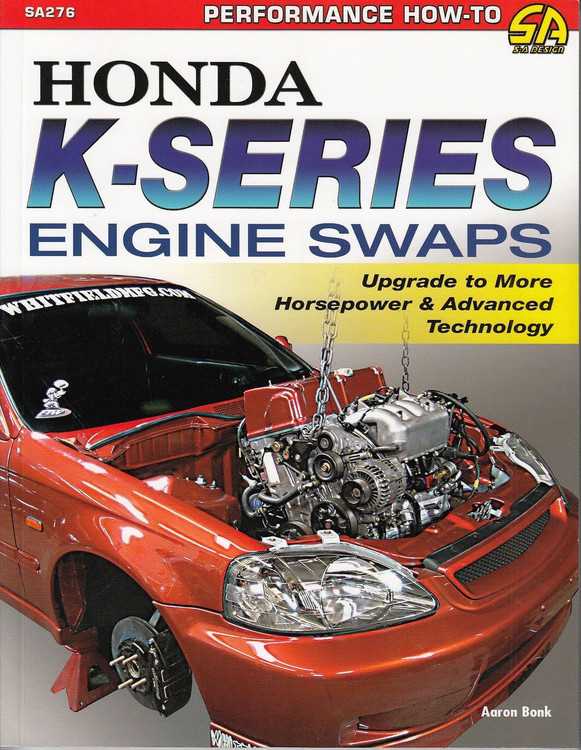 The Honda K-series engine was introduced in 2001, replacing the B-Series as the engine of choice for Honda enthusiasts. These new K-series engines are the most powerful stock 4-cylinder Honda/Acura engines you can get. They feature new technology, such as a roller rocker valvetrain, better flowing heads, and advanced variable cam timing technology, all of which make these engines the most powerful and efficient in the Honda engine family lineup. And that's where engine swappers come in.

In Honda K-Series Engine Swaps, author Aaron Bonk guides you through all the details, facts, and figures you need to complete a successful K-series swap into your favorite chassis. He covers all K-series engine variants, as well as interchangeability, compatibility, accessories, wiring, controls operation, drivetrain considerations, and more. While you can still modify your existing B-series, dollar for dollar, you can't make more power than you can with a Honda K-series engine.
If you have an older chassis and are looking for a serious injection of power and technology, swapping a K-series engine is a great option. Honda K-Series Engine Swaps tells you everything you need to know.

Aaron Bonk has held staff positions and contributed regularly to landmark Honda performance magazines, including Sport Compact Car, Turbo & High-Tech Performance, Super Street, Import Tuner, and many other print and online publications. He recently served as Honda Tuning magazine Editorin-Chief where he continues to contribute regularly. He resides in Southern California with his wife, daughter, son, and Acura NSX.

MSRP:
Now: $59.99
Was:
By: Joseph Potak . Description Variants of GM's groundbreaking family of LS engines are installed in everything• from the company's most mundane panel vans to its earth-shaking Corvette ZR1...

MSRP:
Now: $59.95
Was:
By: Aaron Bonk . (2014 REPRINT) Over the years, Honda has produced everything from stripped down econoboxes to some pretty high-performance machines. In typical hotrodding fashion, it was only a...

MSRP:
Now: $59.95
Was:
By: Richard Holdener .**2015 Black & White Reprint** In Building Honda K-Series Engine Performance, author Richard Holdener gives you a detailed description of the K-series engines, as well as...

How To Swap Ford Modular Engines Into Mustangs, Torinos And More

MSRP:
Now: $89.95
Was:
By: Ian Falloon . Few motorcycles have attracted such a strong following as Honda's Gold Wing. Introduced in 1975, the Gold Wing was like no other motorcycle and has continued to break the mould...

MSRP:
Now: $89.95
Was:
By: Phil West . GOLD WING. Two little words that together identify not just a motorcycle, but a whole sub-culture of bikers and a fabulous era of motorcycling. To many thousands of devoted fans the...

MSRP:
Now: $49.95
Was:
By: Brooklands Books . Honda achieved another 'first' in producing the RC 30 - the first real racing bike to be street legal. This is a book of road track and comparison tests, new model...