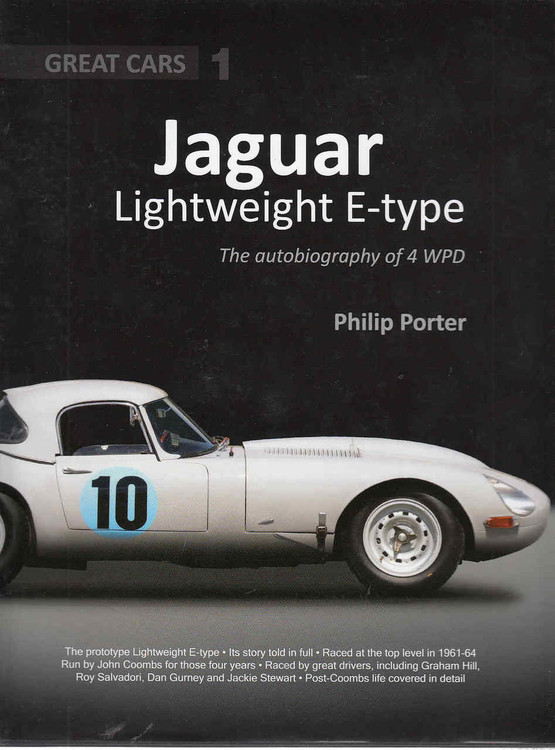 This Great Cars book outlines in exhaustive detail the history of the most important competition Jaguar E-type. Run by John Coombs with factory support and driven by some of the best racing drivers of the day, this car took part in the E-type's first motor
race and later became the prototype all-aluminium Lightweight E-type.

For the first year of its life, 1961, this E-type raced in near-standard form and carried Jaguar dealer Coombs's well-known registration number, BUY 1. In its first race, at Oulton Park that April, it was one of two E-type entries, Roy Salvadori bringing it home
in third place behind the winning sister car driven by Graham Hill. By season's end BUY 1 had raced eight times, taking one win, four second places and two third places.
In subsequent years, with the registration number 4 WPD, this E-type went through a series of technical improvements. It was rebuilt early in 1962 with a bodyshell in lighter-gauge steel, but Coombs's lead driver, Graham Hill, was unable to beat the race-bred
Ferrari 250 GTOs that dominated that season. For 1963 the car was rebuilt again with an all-aluminium body and this time it enjoyed real success, Hill winning all four races he started. Further developed, the Coombs-run car raced on into 1964, young Jackie Stewart winning on his debut.

The car's post-Coombs racing life is also fully covered, embracing up-and-coming Brian Redman's exploits with it in 1965 and its modern-day successes at the Goodwood Revival, where it has twice won the TT Celebration race and has been raced by numerous fine drivers, including Dario Franchitti and Emanuele Pirro.

In this book expert author Philip Porter covers this famous E-type's active life in every detail, using a wide variety of source material - including factory documentation - to explore not only the car's race-byrace performances but also the trials and tribulations of its development and evolution. A fine array of period photographs - every competition appearance is shown - and a gallery of magnificent modern images support the meticulously researched text.

This is the complete record of a most significant racing car.

Philip Porter has written around 30 motoring books and twice won the Montagu Trophy awarded by the Guild of Motoring Writers for the best motoring book of the year. The first such award was for Jaguar E-type — The Definitive History, which was first published in 1989 and then extensively revised and expanded in 2011 as a new edition to mark the E-type's 50th anniversary.

In 2011 Philip's book Ultimate E-type was chosen as 'Book of the Year' by the International Historic Motoring Awards in association with Octane magazine, and in 2012 it was named 'Motorsport Book of the Year' at the British Sports Book Awards.

Since the late '70s Philip has owned two significant E-types: 9600 HP is the original Fixed Head prototype, as exhibited at the Geneva launch and used as a test car by the press; 848 CRY is the roadster that was raced by Robin Sturgess in 1961 and later appeared in The Italian Job.

Philip also runs two successful Jaguar clubs, The XK Club and The E-type Club, which he and his wife founded respectively in 1997 and 2004.

His other books include four written with Sir Stirling Moss and one each with Murray Walker and Martin Brundle.

During the '90s Philip began flying hot air balloons and became an airship test pilot, winning the silver medal at the 1991 European Airship Championships and making the first ever airship flight in Africa. He has twice been chairman of the Sherlock Holmes Society of London and is an active member of the Jerome K. Jerome Society.

MSRP:
Now: $100.00
Was:
Media Jaguar.Com - Hardbound, 66 Pages - with CD-Rom "JAGUAR IS A FOUNDER MEMBER OF THE SPORTS CAR SEGMENT WITH A RICH SPORTING BLOODLINE STRETCHING OVER 75 YEARS, AND IN THE...

MSRP:
Now: $149.95
Was:
This book is published by Brooklands Books Limied and based upon tet and illustrations protected by copyright and first publi8shed in 1961 by Jaguar Cars Limeted. Reprint of the Original Factory...

MSRP:
Now: $89.95
Was:
By: Jaguar World . Since its launch in 1961 the Jaguar E-Type has been top of the `wish list' for many a sports car lover. Nearly forty years on, enthusiasm for this icon of motoring history seems...

MSRP:
Now: $195.00
Was:
The Jaguar Mk I / and Mk II is arguably the most famous and instantly recognisable saloon produced by Jaguar to date. The Mk II was the best-selling Jaguar of the sixties and increased Jaguar's sales...

MSRP:
Now: $29.95
Was:
By: Nigel Thorley . Features Like having a real marque expert at your side – benefit from years of real ownership experience Where and how to buy a Jaguar Mark 1 & 2 Advice on choosing...

MSRP:
Now: $495.00
Was:
By: Philip Porter . Description Rarely, if ever, has a car had a greater impact than the Jaguar E-type. Not only did the E-type's arrival in 1961 make a huge impression on the motoring world, but it...