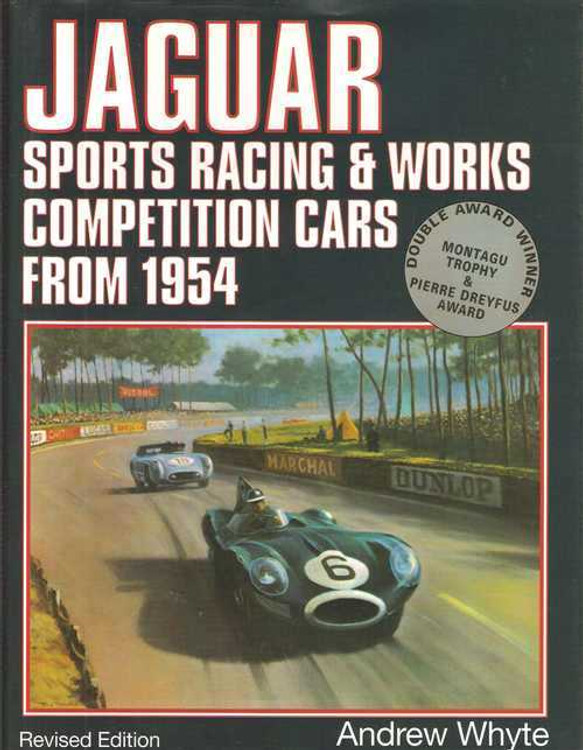 Now re-issued due to continuing demand, this is the second volume of Andrew Whyte's definitive two-part history of Jaguar in motorsport. Taking up his narrative as the legendary D-type emerges from Browns Lane and is prepared for its Le Mans debut, the author charts the fascinating and involved story of Jaguar's competition cars and the people who raced them, from those victorious heights of the 1950s to the European and World Championship-winning achievements of the 1980s.

The full story is told of D-type development and production, its successes as part of the official works effort which ceased in 1956, and the subsequent years when these cars, and later the racing E-types, continued to acquit themselves honourably in private hands. Not forgotten are the XK-engined hybrids such as the Lister-Jaguars, Cooper- Jaguars and the other Browns Lane products used in competition.

Less fortunate ventures are recounted, too, including the short-lived XKSS, the stillborn XJ13 and the unhappy Broadspeed connection. The story continues with Jaguar's racing renaissance brought about largely by the exploits of Bob Tullius's Group 44 team, and Tom Walkinshaw and TWR who, together, carried this famous marque back to the winner's circle and set the new Jaguar company on course for its special goal: to win again the Le Mans 24-hour race. That target was achieved in 1988, shortly after this book was first published. Sadly, Andrew Whyte died that same year and was therefore never able to bring his work up to date.

Also contained within this volume are 11 comprehensive appendices, included amongst which is an individual history of every D-type, XKSS and special-bodied E-type built, a separate history of club racing internationally, profiles of the many works drivers, and specifications of all the important Jaguar racing engines.

This book, which contains over 1,100 illustrations, is an unparalleled story of a racing legend, covering 34 years and taking Jaguar from one pinnacle of sporting success to another, from one generation to the next.

MSRP:
Now: $150.00
Was:
By: Martin Buckley . Description Over 60 years on from the launch of the ground-breaking XK engine, cornerstone of Jaguar's post-war history, the famous Coventry company is entering a new era under...