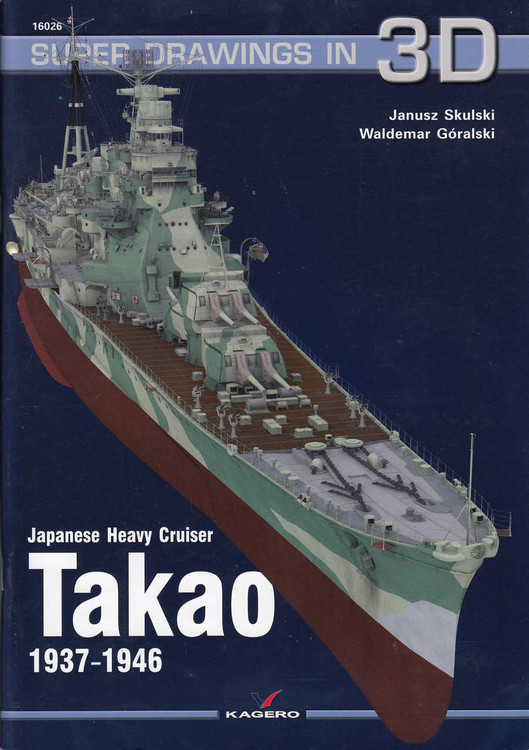 Takao was the first of four Takao-class heavy cruisers designed to be an improvement over the previous My?k?-class design. The My?k? had proved to be unstable and required modifications, which were incorporated into the Takao design.

The Takao-class ships were approved under the 1927 fiscal year budget as part of the Imperial Japanese Navy's strategy of the Decisive Battle, forming the backbone of a multipurpose long-range strike force. Takao was built by the Yokosuka Naval shipyards, and like her sister ships, was named after a mountain.

Launched on 12 May 1930 at the Yokosuka Navy Yard and commissioned on 31 May 1932, she was the lead ship of her class, assigned to the Pacific from the start of the war. In early 1942, Takao operated in the Java Sea in operations culminating in the Battle of the Java Sea in early March, when one of Takao's floatplanes bombed the Dutch merchant ship Enggano. The next night, Takao and Atago overtook the old United States Navy destroyer Pillsbury and sank her with no survivors. Throughout the rest of the war she was involved in various Pacific campaigns against the Allies.

About the Series
This series focuses on the construction of famous ships- battleships, carriers, cruisers, and submarines. With ground-breaking 3D imagery, each corner, angle, and dimension of the ship is viewable. With various close-up views, and each 3D image based on actual technical scale drawings and photographs, this makes an exceptional reference tool. Information on the design, development and combat history of each vessel is also included, as well as numerous photographs and 1/350th scale drawings.

The Heavy Cruiser Takao (Anatomy of the Ship Series)

Jeep 4.0 Engines How to Rebuild and Modify

MSRP:
Now: $79.95
Was:
By: C. L. Zinn II . A rare behind the scenes look at the designs that led to AMC's Javelin. Beginning with early design sketches, follow the designers through clay models, fibreglass mockups,...