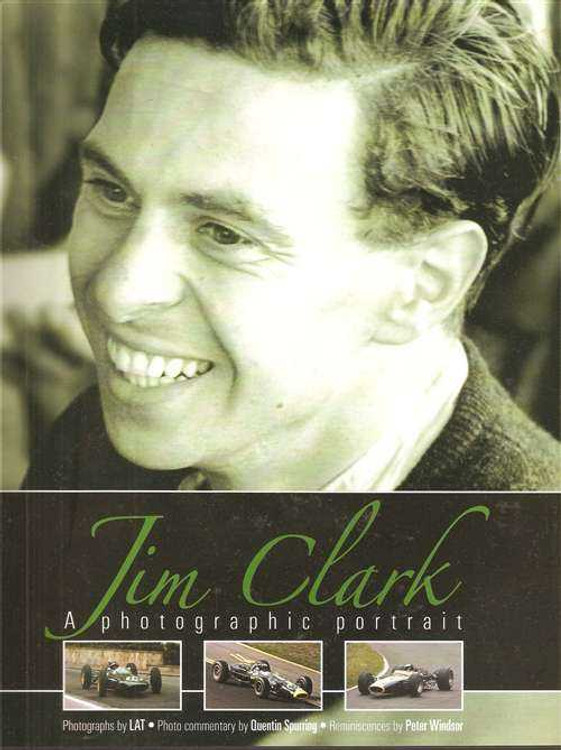 Who ho was the greatest racing driver of them all? The special skills that have been needed to master Grand Prix cars have varied so widely, over the course of more than a century, that this question cannot be answered. Yet it is often asked. And the name of Jim Clark is always mentioned.

The essential physical attributes of every exceptional racing driver will always be outstanding fitness, reactions, balance, peripheral vision and eye-to-hand (as well as eye-to-foot) coordination. The mental attributes include bravery, commitment, determination, mechanical sympathy, intelligence and racecraft. Jim Clark possessed all of these in abundance, and coordinated them as few others.

The wonderful images in this book have been selected to chart the career of a modest young man who joined teenage friends in taking up motorsport as a hobby, and discovered in himself an extraordinary natural talent. He honed this amazing talent and took up motor racing as his profession. When he arrived in Grand Prix racing, he honed it some more. He raced only with one Formula 1 team, collaborating with its innovative founder to transform it into the best in the business. When he lost his life at the age of 32, he had earned the deepest respect and admiration of all his peers.

Jim Clark was the Formula 1 World Champion only twice, in 1963 and 1965. Had he been provided with more reliable equipment, he would probably have won the title five times in six seasons. He was robbed of championships when his cars let him down as he was leading the final Grands Prix in both 1962 and 1964. He led almost twice as many miles as the eventual champion in 1967 — a year in which he produced a performance at Monza that almost defied belief. Yet it was on 'driver circuits' that he truly excelled. He loved the streets of Monaco, but never won on them. He detested Spa-Francorchamps, but won there four years in a row.

When he died, so tragically young, he was at the peak of his formidable powers. He won his last Grand Prix, from pole position. It was his 48th Formula 1 victory overall, and that record included 25 championship wins, from 72 starts. He had 33 championship pole positions, and drove 28 championship fastest laps. He was also a GT champion, a touring car champion, a Tasman champion, and an Indianapolis 500 champion.

This book, no doubt, is a tribute to one of the greatest racing drivers the world has ever seen.

Jim Clark - The Legends Lives On

MSRP:
Now: $89.95
Was:
By: LAT, Mike Doodson . Nigel Mansell first took part in a World Championship Grand Prix in 1980, and didn't win one until five years later. From that moment, however, his career made bigger...

MSRP:
Now: $125.00
Was:
By: LAT, Quentin Spurring . The he outstanding images in this book chronicle the career of one of the most admired Grand Prix drivers in living memory — and surely the most loved in all of Fl...

MSRP:
Now: $59.95
Was:
By: Jerry Heasley . Description Rare, super-high-performance, and historically significant muscle cars and sports cars have been spotted in old garages, resting in pastures, sitting in parking...

Jim Clark - The Legends Lives On

Jim Clark And His Most Successful Lotus (Eoin Young)

MSRP:
Now: $195.00
Was:
By: Eoin Young . In 1963 Jim Clark set records with a slim green Formula 1 Lotus-Climax that have never been bettered. He won seven of that season's ten Grands Prix and took the World...