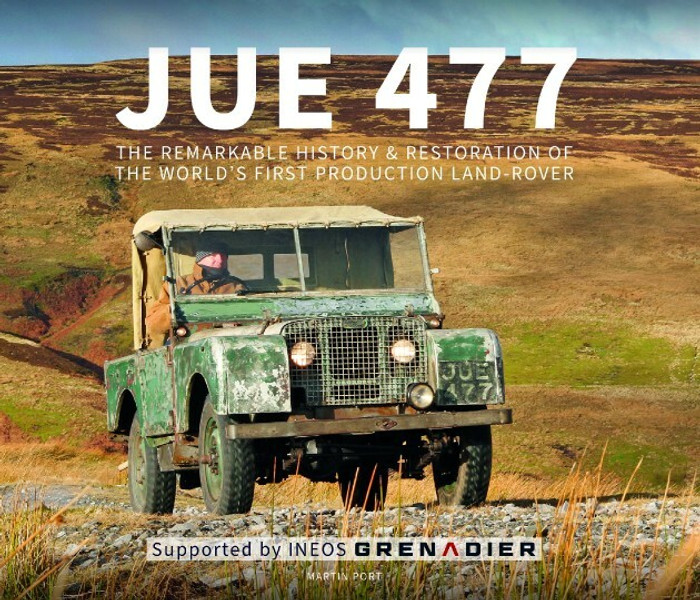 Revealed to the world in 1948, the Land-Rover not only revived the Rover Company’s fortunes in an austerity-riddled post-war period, but galvanised its future thanks to the model’s almost immediate success. With the manufacture of an initial 48 ‘pre-production’ examples coming to a close, the first official production models were assembled – starting with chassis 860001. As original factory records prove, this pivotal vehicle was destined for His Royal Highness King George VI, but the decision was made to postpone the presentation and instead, ‘number one’ was retained by the factory until 1950 when it was registered JUE 477 before leaving Rover Company ownership. After decades left out in the cold and exposed to the elements, 860001 had certainly seen better days, but thanks to the determination of Sir Jim Ratcliffe, founder and Chairman of INEOS, the future of JUE 477 was secured. Over the next two years, a dedicated team of experts, led by chief restorer, Julian Shoolheifer set about restoring the vehicle while retaining as much of its original DNA as was physically, and safely, possible and crucially, making sure that this remarkable vehicle’s history and past life was still worn with pride.

MSRP:
Now: $49.95
Was:
By: Practical Classics . Our Series One Land Rover restoration is really a story in two parts, because it started off as a 'Rolling Rebuild' and ended up as a full scale 'Total...

MSRP:
Now: $59.95
Was:
By: Richard Green and R.M.Clarke . As anyone who owns an elderly Land Rover knows, taking it apart and putting it back together again are not just things you do to keep it on the road; they are part...

MSRP:
Now: $66.95
Was:
By: Lindsay Porter . An important addition to the popular Haynes series, this is a clearly written, well-illustrated guide to the history, purchase, specification, bodywork, mechanics, interior,...

MSRP:
Now: $95.00
Was:
Hardcover, Published in 2020, 160 pages James Hetfield, Metallica's front man, opens up his garage for an exclusive tour of the highlights of his incredible collection of restored and customized...

MSRP:
Now: $450.00
Was:
Hardcover, numbered, Limited to 1000 The book sets out the histories, so far as we have been able to ascertain them, of every XK120 Jaguar to have been in the Southern Hemisphere – and,...

MSRP:
Now: $58.95
Was:
Author Mike Mavrigian guides you through each important stage of the Holley carb rebuilding process, so you have the best operating carburetor for a particular engine and application. In addition, he...

MSRP:
Now: $59.95
Was:
Following feedback from fans over the new format adopted for the 2018 review, the 2019 edition will be one of the most comprehensive ever. Spread across two discs, the review will feature extended...

Self Preservation Society - 50 Years of The Italian Job (Matthew Field)

MSRP:
Now: $149.95
Was:
336 pages, Hardcover, Published in 2019 This year marks the 50th anniversary of the British cult classic movie The Italian Job. Loaded with sixties swagger, and famed for its endlessly quotable...