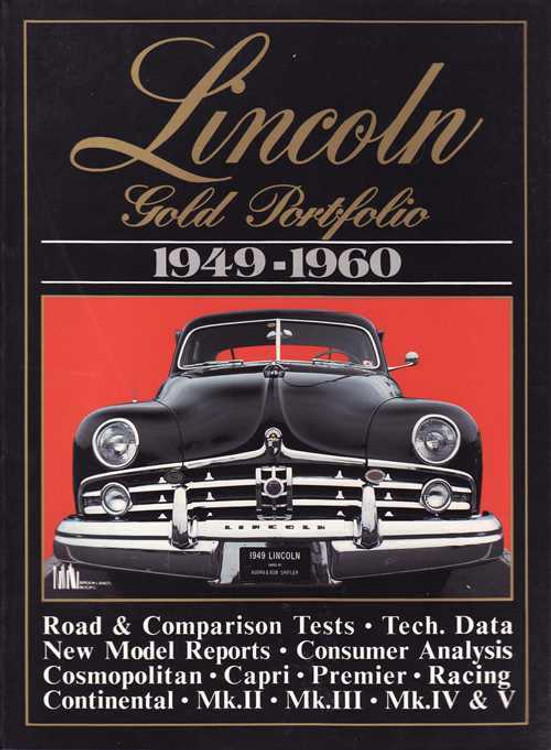 Post-war Lincoln evolved from 1944 to their introduction in 1949. In 1952 the whole range was restyled with Lincoln receiving a new V8 giving 160bhp. Bodily they were high-waisted, having more legroom in the rear.

Later boosted to 205bhp the engine was quiet and the whole car gave a comfortable ride. Over the following years the cars were steadily but unobtrusively improved, being voted the "Safest car in America" in 1955.

The Continental of 1955 was introduced for the prestige market. Dramatic changes occurred with the change to unitised construction in 1958 and the incorporation of the Continental as a production model brought the total of models available up to 10. Small changes were made in the following years.

This is a book of contemporary road and comparison tests, technical and specification data, model introductions, competition and driver's reports.

MSRP:
Now: CAD64.82
Was:
By: Brooklands Books . As part of the group controlled by the Hawker Siddeley aircraft Co. All their resources were behind the evolution of the new Two litre Armstrong Siddeley which went into...

MSRP:
Now: CAD46.29
Was:
By: Brooklands Books . Ford's large cars have always proved popular as an everyday vehicle. However, one comment throughout the years has been that controls have been difficult to use. On the plus...

MSRP:
Now: CAD64.82
Was:
By: Brooklands Books . To revive an ailing company the restyled 1961 Continental was a massive success. The styling was so liked that it remained basically unchanged until the new range was...

MSRP:
Now: CAD324.35
Was:
By: Paul Skilleter . The Lister-Jaguar was Britain’s most successful big-engined sports racing car of the late 1950s, especially when driven by the brilliant Archie Scott Brown – the...

MSRP:
Now: CAD46.29
Was:
By: Brooklands Books . The restyled 1961 Continental was a massive success and remained so until a new range was introduced in 1969. Now designated the Mk III, this car had a new design engine, a V8...

MSRP:
Now: CAD64.82
Was:
By: Hal Moloney . The definitive guide to Australia's most controversial car - the Leyland P76. It contains comprehensive information on all aspects of the car including specifications,...