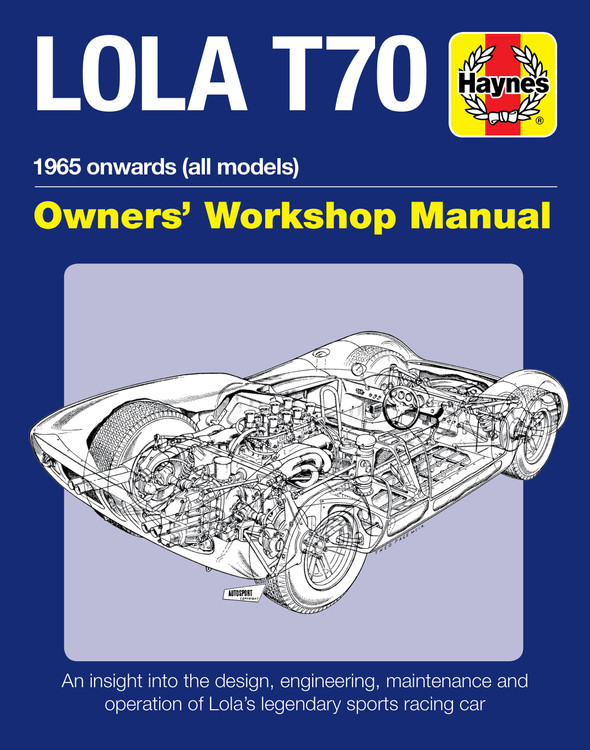 The Lola T70 was developed by Lola Cars in 1965 for sports car racing – Lola built the chassis, which were typically powered by large American V8 engines, predominantly Chevrolets and Fords. The T70 was prolific throughout the mid- to late-1960s, and over 100 examples were built in three versions – an open-topped MkI and MkII Spyder, followed by a MkIII Coup, and an updated MkIIIB.

The Lola T70 Coup was the first Lola to be designed in the wind tunnel. Chief designer Eric Broadley enlisted the help of Tony Southgate, and the finished car displayed fine handling and stunning styling. Its final evocation – the MkIIIB – is arguably one of the most beautiful racing cars of its era.

The first successes for the T70 were in the US, where the car won the Monteray Grand Prix at Laguna Seca in October 1965. In 1966, the T70 dominated the Can-Am championship, winning five of the six races in the series – three in the hands of John Surtees, one with Dan Gurney, and one with Mark Donohue, with John Surtees becoming champion in a Chevrolet-powered example.

In 1968, T70s finished 1–2 in the Daytona 24 Hours, although there was strong opposition in both the European and US scene from Ford’s GT40. The T70 was highly successful in the domestic UK and European championships, and won regularly. In 1970, T70s were used during the filming of the Steve McQueen movie Le Mans, some of them disguised to appear as Porsche 917s or Ferrari 512s.

Today, Lola T70s are regular competitors on the historic racing scene, and examples are highly sought after by collectors.

Author: Chas Parker has written a number of books about motor sport, including full histories of Brands Hatch and Silverstone circuits, and Haynes Manuals for the D-type Jaguar and Bugatti Type 35. He was short-listed, together with co-author Philip Porter, for the 2017 RAC Motoring Book of the Year Award for his book on the 1953 Le Mans-winning C-type Jaguar.

MSRP:
Now: $32.95
Was:
By: Ben Robinson, Marcus Riley . Description The U.S.S. Enterprise is without doubt the most famous starship in history. The vessels that have carried the name have saved the galaxy countless times...

MSRP:
Now: $9.99
Was:
This book is packed with the world’s ultimate road cars, from the Ariel Atom 500 to the W Motors Fenyr. Fast and furious facts for each entry include highest speeds, engine capacity, power to...

MSRP:
Now: $49.95
Was:
An insight into the development, manufacture and operation of the Vickers-Maxim medium machine guns. The Maxim gun was the first fully automated machine gun to be introduced into military...

MSRP:
Now: $39.95
Was:
1945 onwards (strategic and tactical delivery systems) Much misinformation has been published by those who support, as well as those who are against, the continued deployment of nuclear weapons as...

MSRP:
Now: $44.95
Was:
The German Panther is arguably the finest medium tank of the Second World War and one of the greatest ever built. Combining unmatched firepower, armour protection and mobility it was the primary...

MSRP:
Now: $195.00
Was:
John S. Allen and Gordon J. Jones Foreword by Jacky Ickx 12 September 2019 This new edition of a classic book tells the story of the celebrated Ford GT40 through a remarkable array of over 850...

MSRP:
Now: $59.95
Was:
By: Brooklands Books . Like so many other people who have successfully turned their hobbies into careers, in a relatively short space of time Eric Broadley, the man behind Lola, switched from being...